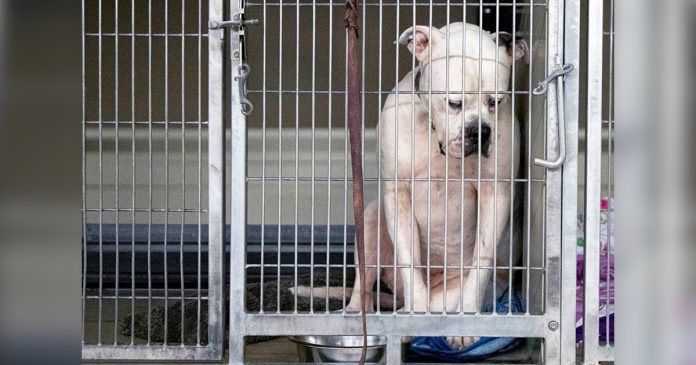 No words could describe how heartbroken this 4-year-old American bulldog when he was dropped off at a shelter and had to separate from his owner.

The heartbreaking photo of the American bulldog named Ritter which shows him looking down with a sorrowful expression quickly went viral on the internet. It has been shared more than 3,000 times on Facebook alone.

“A picture is worth a thousand words … and Ritter’s is no different,” the caption of the touching photo wrote.

GREAT NEWSRitter has found a home!! Thank you to everyone who shared his story and reached out. Happily ever after,…

Ritter had to separate from his owner due to them losing their home. The thought of having to be separated from his family for good could not console his heart when he arrived at the shelter on Tuesday.

“Dropped off at the shelter due to his family losing his home, Ritter’s negative reaction to the shelter was immediate and heartbreaking. This is the reality our animals face every day – Heartbreak and a sense of hopelessness.”

Nevertheless, it seems that it would be the only photo of Ritter looking dejected in the corner of a kennel.

Thanks to the viral post of Ritter, the shelter posted an update that the bulldog has found a new home the following day!

“GREAT NEWS. Ritter has found a home!! Thank you to everyone who shared his story and reached out. Happily ever after, Ritter!” the shelter updated their original post on Wednesday.

In a new post on Thursday, Ritter was pictured smiling by volunteer and photographer Alan Wlasuk.

The Power of a Photo.Ritter's heartbreaking photo captured by long-time volunteer and photographer Alan Wlasuk went…

The photographer captured the moments of “sadness, disappointment, and desperation” shown by the cats and dogs who were left at the shelter.

“Most are not fortunate to have an amazing photographer present to witness those moments of sadness, disappointment, and desperation. But please make no mistake, they all feel it,” the caption wrote.