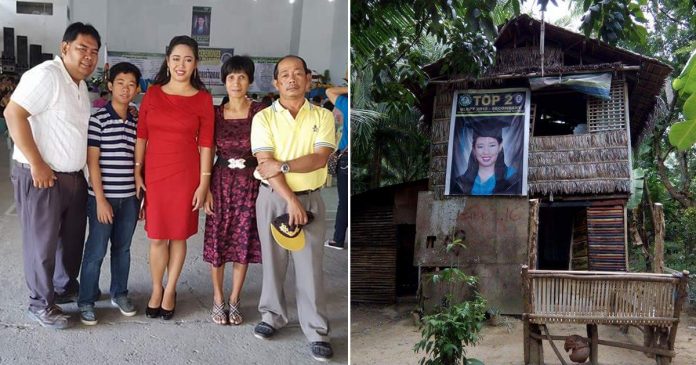 In spite of coming from a poverty-stricken background, Iah Bantang Seraspi never stops dreaming for a brighter future and she proves it when she came second in the Philippines’ board exams of teachers!

A daughter of a fisherman, Seraspi grew up poor as her father only earns around PHP100 (USD 1.96) a day. Her daily meals consisted of rice with just a sprinkle of salt.

Nevertheless, poverty has never stopped the fisherman’s daughter from studying.

Seraspi had consistently been an honor student at her elementary school and she continued to score well in high school.

Getting ready for the oathtaking.

Being an excellent student herself, it was not a surprise that Seraspi passed the entrance examinations for the University of the Philippines. Unfortunately, she had to forgo her dream to enroll at the university since her family could not afford to pay for her studies.

She then decided to enroll at Romblon State University in her hometown and it was actually a blessing in disguise as she later met the Esquejos family of Looc.

When the Looc family found out that Seraspi is the great-granddaughter of their family’s long-time tenant, they did not hesitate to provide financial support for her studies.

Following her graduation, Seraspi later took the nationwide Licensure Exam for Teachers (LET). It was during her time in college that she discovered she wanted to be a teacher.

In the national exam, she placed second out of 81,463 candidates!

This house produced the Top 2 in 2015 Board Exam for Secondary School Teachers out of 81,000 + test takers who took the exam.

She scored 90 percent in the exam, just a few decimal digits away from the first place who scored 90.20 percent.

In an interview with ABS-CBN News, Seraspi said that she strived for the better as nothing would change if she just kept complaining about being poor.

“I accepted my situation—that if I just kept on complaining, nothing would ever change, we will remain poor. Instead of complaining, I viewed poverty as a self-imposed challenge,” Seraspi said.

For those who are facing the same struggle, Seraspi has an inspiring message. “Never give up just because you’re poor. I still believe that life is fair. Just look at poverty as a challenge to improve oneself and get out of the bad situation.”