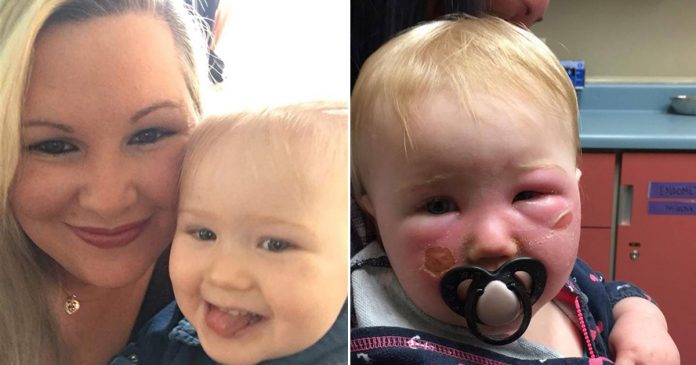 Using spray sunscreen may be the easiest and fastest way to block harmful sun’s rays from the skin but one mother learned the hard way that spray sunscreen, too, can cause severe burns on her toddler.

As a mother of a 2-year-old girl, Rebecca Cannon thought that she was doing her best to protect her young daughter from harmful sun’s UV rays when she sprayed some sunscreen Kyla’s skin before she went to play outside.

The 32-year-old mother was visiting her sister in Newfoundland, Canada when she later realized that she had forgotten to bring their usual sunscreen. Rebecca then borrowed the Banana Boat Kids Sunscreen Spray SPF 50 from her sister.

Just before Kyla went to play, Rebecca sprayed some sunscreen on her hands and applied it on Kyla’s nose and cheeks.

“When it came to having sunscreen on, I thought it was better to have some sunscreen than none at all,” Rebecca said in an interview with TODAY.

Unfortunately, just a moment after she applied the sunscreen, Kyla’s skin became red and swollen. It became even worse the following day.

Rebecca then brought Kyla to the hospital where doctors later diagnosed her with a second-degree burn. It baffled the mother as Kyla wore a hat and was covered during the day.

In spite of the cream that the doctors prescribed for Kyla, her skin did not get any better and it became worse. They then returned to the hospital and met a dermatologist who told Rebecca that the burn was caused by something in the sunscreen.

In light of the terrifying incident, Rebecca wrote on her Facebook account to warn other parents about using spray sunscreen on young children.

”Kyla is back home after another hospital trip this morning due to extreme swelling, but she is doing ok and is in good spirits. Please watch and be careful when using aerosol sunscreen! I have done a lot of research since coming home and have found a disturbing amount of cases like ours. I don’t know why it’s not removed from the shelves !!.. ,” the mother wrote.

”I just want the word out for parents to be careful as to what they are putting on their children. On the back of the bottle, it said it was safe for use on all ages unless the child is under 6 months of age,” Rebecca added.

According to Dr. Adam Friedman, what happened to Kyla was probably caused by an irritating substance like alcohol or vitamin C found in the sunscreen. “It could simply be an irritant reaction rather than something unique to this product,” he said.

He recommended that younger children use mineral block sunscreens which contain zinc oxide or titanium dioxide until they are 4 or 5 years old.

“There are specific sunscreens for different ages because there are unique biological differences at different ages,” he said. “Infant skin is much more irritable.”