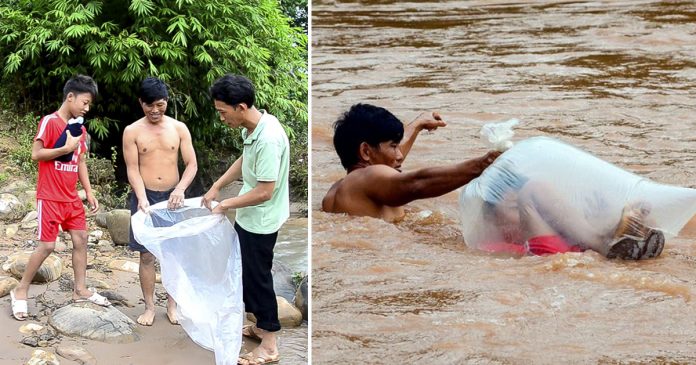 It is very common to see children hopping on a bus to go to school in many parts of the world but not in Huoi Hua, Vietnam.

There is no public transport available in the mountainous region in Vietnam’s northern province let alone school buses to take children to their school every morning.

All the residents in Huoi Hua have is a huge plastic bag and that is what they usually use to ferry their children across the river to get to their school.

According to Vietnamese media, there are bamboo bridges built for the residents to cross the river to get to the other side.

However, during the rainy season, the bamboo bridges are almost impossible to be used and the river’s strong current makes it even unsafe for them to take rafts.

Nevertheless, it does not stop parents in Huoi Hua from sending their children to school every morning even if they have to place their children in an oversized plastic bag and carry them to the other side of the river.

Some proposals have been made to replace the bamboo bridges with other sturdier bridges. Unfortunately, due to the lack of funds and the nature of the village which can pose a great challenge to build new bridges have made the proposals nearly impossible to be approved so far.

The village also has another route that does not involve an oversized plastic bag and braving the river’s strong tides.

However, that means they have to embark on a five-hour walk journey on rough and rocky terrain.

The journey also means that the children have to spend the week at the school and can only return home during the weekend.

Apparently, residents in Huoi Hua are not the only ones who have to go to extra lengths just to send their children to school.

In footage which was captured in 2013, villagers in other parts of Vietnam also encounter similar situation.

It appears that until the wet season is over, they will have no choice but to put their children in a plastic bag and carry them to the other side of the river.

Bride ready to walk to altar. But then, her wheelchair-bound groom...