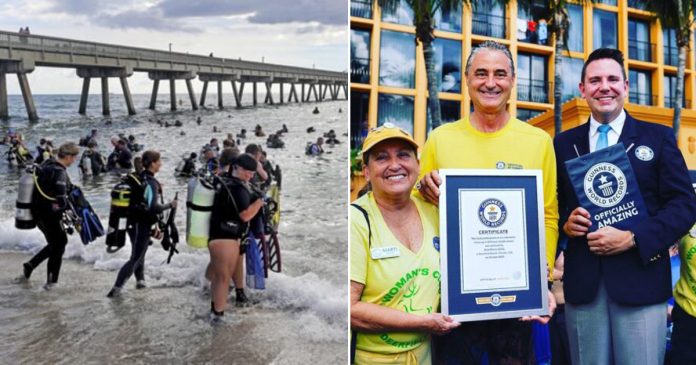 Keeping the world clean is not an easy thing to do and can never be achieved by one person alone. A group of locals and divers from Europe and South America were well aware of this and descended on Deerfield Beach, north of Miami to take part in a record-breaking beach cleanup operation.

On its 15th year organized by Dixie Divers and Deerfield Beach Women’s Club, the group of 633 divers collected more rubbish than ever this year—around 1,626 pounds of rubbish and 60 pounds of fishing line.

They did it all only in a two-hour cleanup operation.

CNN reported that the effort has broken the Guinness World Record for the largest group to conduct an underwater cleanup. The previous record was held by Ahmed Gabr, a former scuba diver with the Egyptian Army, who organized a dive for 613 divers in the Red Sea in 2015.

They not only did an amazing effort in cleaning the rubbish but also set a new world record too!

According to Unilad, the official weight of the collection is still being tallied but some people estimated that the cleanup removed around 3,200 pounds of debris. Tyler Bourgoine who helped organize the event stated that there’s so much debris present in the area off the Deerfield Beach because the place is very popular for fishing.

“It was a great time. Everyone was working together and cleaning up one part of the reef or pier,” said Bourgoine.

633 divers came together today to raise awareness about ocean pollution and unite to try and break a #guinessworldrecord for the world’s largest u/w cleanup and they did it!
Thanks to all the divers, participants and organisers @PADI @DixieDivers @GWR #deerbeachpier #florida pic.twitter.com/G3nAeVv7H3

“The last record took 24 hours and we did it in two hours, so it’s amazing,” told the owner of Dixie Divers facility in Deerfield Beach, Arlington Pavan to The Hill.

Let’s celebrate saving our oceans and protecting our precious environment. ???
Congratulations and thank you to Dixie Divers & Deerfield Beach Woman’s Club for your historic achievement in breaking the record for the largest ocean floor cleanup EVER!! pic.twitter.com/JjsK8Sx9Vw

National Ocean Service reported that around eight million tonnes of plastic enter the oceans every year. Hence, an operation like this is giving more hope to the oceans and should definitely be done more frequently.

Student who only looked down at his desk changed drastically with...