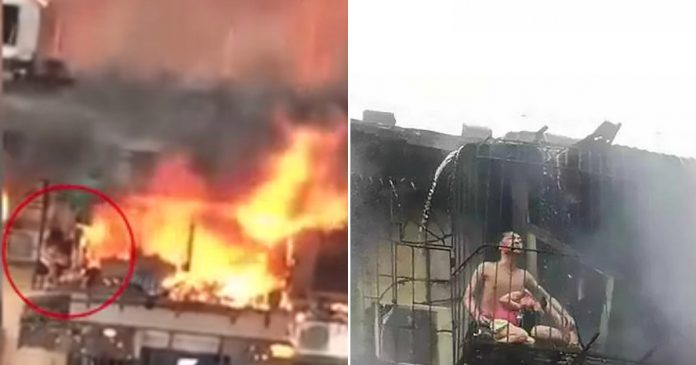 Many parents would do anything for their children including these parents from China who risked their lives and sacrificed their bodies to shield their daughter from a house fire.

In the viral footage, the mother and father can be seen crouching over their four-year-old daughter when they were trapped inside their burning house in Guangzhou’s Liwan District.

Their flat on the fifth floor went up in flames around 3 pm on June 19 and sent the family to their window grilled where they were trapped.

A relative of the family who was identified as Mr. Zhang said that he immediately went to the building when he saw the flames.

However, he did not dare to go inside the flat as the fire had grown bigger and it was too dangerous.

He then called the firefighters.

The house fire was later managed to be put out by the Guangzhou Fire Brigade with a water hose.

16 fire engines and 99 firefighters were dispatched to the burning flat and a huge ladder was used to rescue the trapped family.

Sadly, the mother did not make it as she was burned to death when the firefighters managed to reach the family’s flat.

Meanwhile, the father survived the fire but he was reported to be in a critical condition.

Their four-year-old daughter sustained a serious head injury. According to their relative and neighbor, Mr. Zhen, the girl is the youngest of her three siblings. Her older siblings were not at home during the fire.

The Guangzhou Fire Brigade later revealed that the fire started from the top floor of the six-story flat building which was built using concrete and steel.

The fire is now currently investigated but the cause of the fire still unknown.

There seems to be some problem with the new Samsung Galaxy...