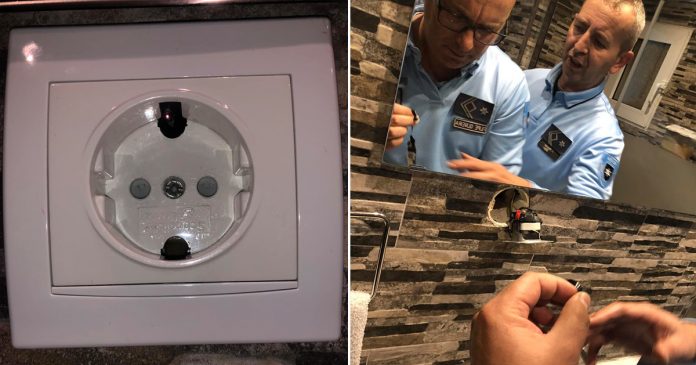 Rubee Woo and her friends from Malaysia booked an apartment called “Nice House” in Portugal but unfortunately, their stay was not as nice as they had expected when they found a hidden camera.

The three friends found a hidden camera in their apartment in the city of Porto during their stay on June 20.

According to her Facebook post, Rubee revealed that the hidden camera was found in the bathroom of the apartment.

Rubee’s friend was about to take a shower when she felt that “there was something wrong” with the socket in the bathroom.

She then took a closer look at the socket and that was when she found out the hidden camera after inspected the socket with her phone’s flashlight.

Terrified by the unexpected discovery, Rubee and her friends called the local police but they suspected that the owner of the apartment who was staying one floor below them had found out about it.

“While waiting for the police, we heard noises downstairs and we were frightened because the owner might have realized that we found the camera,” Rubee wrote.

The local police arrived half an hour later and removed the camera from the bathroom.

“After the police removed the camera, we packed our things and handed the apartment key to them. “When we were leaving the place, the owner didn’t dare to look us in the eye. We are 200% sure that the camera was set up by him,” Rubee wrote.

However, they had an instinct that no action would be taken as the owner was seen smoking with the police officers before they left the apartment.

“I feel like they might not take any action and I didn’t want us to be bullied just because we’re Asian. That’s why we decided to make a report with the tourist police the next morning,” she added.

There has yet to be an update from the local police about the case but Rubee hopes that the owner would be punished accordingly.

In her post, Rubee also warned others about booking holiday accommodations based on reviews.

She and her friends booked the apartment which was rated 9.2 on Booking.com.

The website had arranged for another accommodation for the group of women on the night of the incident but the incident had certainly scarred them for life.

“Please, please, please, be wary of hidden cameras. I used to think that it wouldn’t happen to me and now it has,” Rubee concluded.