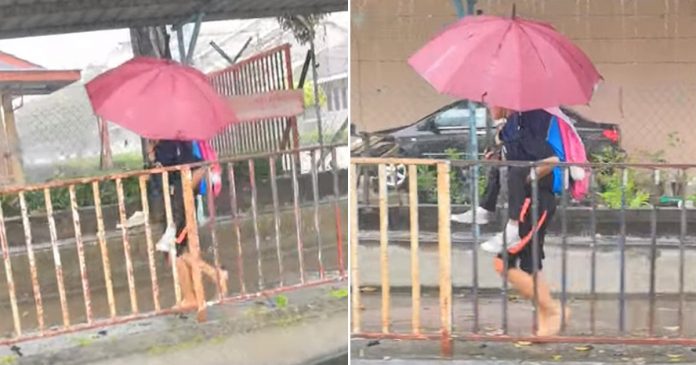 Not everyone is lucky to have a good friend like this girl who gave a piggyback ride to her special needs friend during a heavy downpour in Malaysia.

The girl’s selfless and kindhearted action was spotted by a teacher on a rainy morning who witnessed the heartwarming scene.

According to Malay Mail, Facebook user Maslika Ramli took the video of the two good friends and posted it on the Facebook group called “Autisme Malaysia“.

It was a scene that would move anyone’s heart as the girl can be seen carrying her friend with autism on her back as she holds an umbrella in her hand.

Maslika wrote that she was impressed by the girl’s action as she is a student from one of the top classes in the school where she teaches.

“I’m sharing this video because I want parents of children with special needs to be confident and believe that there are people who will look out for your kids,” she said.

The touching video quickly went viral on the internet when it was first posted and it has garnered over 2,600 likes and 225 comments.

Many netizens on Facebook praised the girl for helping her friend. “Congratulations to the parents and teachers who taught this student to have such a good demeanor,” a netizen wrote.

Another netizen also suggested for the girl to be given an award for her kind action. “The teachers and the principal of the school should be notified of that student so she can be given an award that will set an example for other students to follow.”