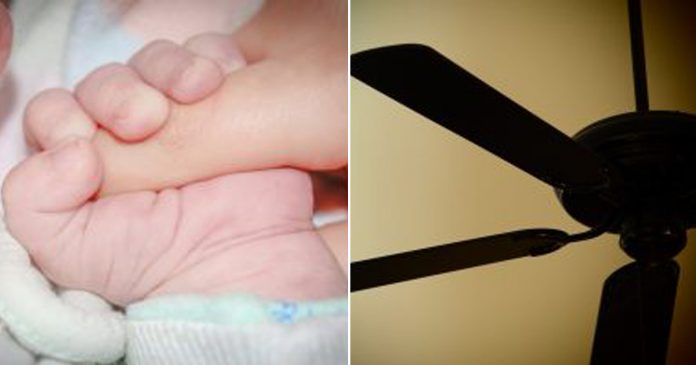 A 2-year-old Malaysian girl died from severe head injuries after she was hit by a ceiling fan.

The tragic incident which occurred when her 25-year-old male relative threw her up in the air near a ceiling fan which resulted in her head being hit by the fan.

The girl was then rushed to Ampang Hospital where she was taken for emergency treatment on June 16. Unfortunately, she was later pronounced dead the following day.

According to NST, the male relative wanted to cheer the girl up who was crying earlier by throwing her in the air when they were playing together.

Post mortem suggested that the girl died due to “blunt force trauma”.

The father of the girl has lodged a police report against the male relative. The male relative has now been remanded for seven days until June 25 while the investigation is ongoing.

The tragedy has attracted various reactions from the public as some people pointed out how dangerous it is to throw a child in the air especially near a moving ceiling fan.

“This is a very common thing a lot of people do without realizing the dangers of it. I hope this news spread enough to create the awareness of how risky tossing children into the air is,” one netizen commented.

Meanwhile, many netizens offered their condolences to the grieving family and sympathy to the male relative.

“I truly believe that this is a pure accident due to lack of attention to the safety and surroundings. I am sure the uncle feels very sad and regretful and this will stay with him. Such a sad loss,” the netizen wrote.

Throwing children in the air may bring more harm than good as it may cause the tearing of small blood vessels in the brain in toddlers or babies, which can lead to brain damage.

Another risk is there is a possibility of dropping the child or they accidentally hit other objects overhead.