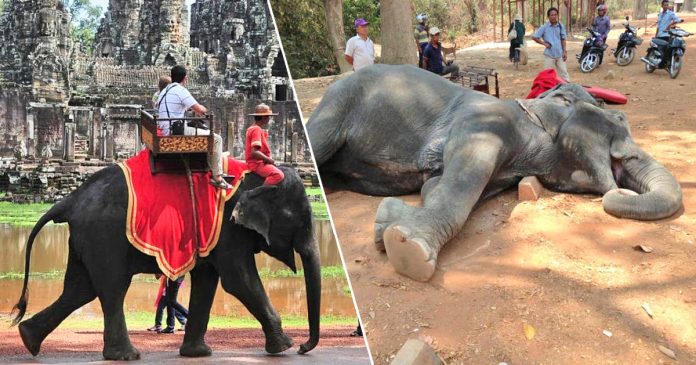 There will be no more of elephant rides available at Cambodia’s Angkor Wat starting early 2020.

Every year, a group of 14 elephants is forced to overwork to accommodate tourists who want a ride while visiting the World Heritage site.

#GoodNews – #Elephant rides to stop at Angkor Wat in #Cambodia by 2020. The 14 elephants will no longer be forced to work at the Angkor Wat Temple where over 2.5 million international tourists visit each year. They will all be transferred to a conservation & breeding center pic.twitter.com/rMwfP1NJRO

Over 2.5 million tourists visit Angkor Wat each year with many eager to take a ride on the overworked elephants despite the animals’ suffering and exhaustion.

The Angkor Elephant Group Committee has confirmed that the overworked group of 14 elephants will be transferred to a conservation and breeding centre by early 2020.

The move comes three years after an elephant collapsed and died while carrying two tourists to the popular Cambodian monument in 2016.

STAE is delighted to reiterate that the awful Angkor Wat resort in Cambodia is planning to drop the use of elephants in tourism. The horrors include this tragic incident: https://t.co/wblJuOH42X
We will report on further developments & keep pressing for a ban on brutal ads. pic.twitter.com/x45NixYyJB

A veterinarian later examined the elephant and reported that it died due to high temperatures, heat exhaustion and lack of wind to help it cool down. The incident quickly sparked international outrage at the cruel practice.

Unfortunately, another elephant died due to exhaustion two years later, leading to petition to stop elephant rides which gained 14,000 in just 48 hours after the elephant died.

BIG NEWS: The use of elephants in Angkor Wat is due to end in 2020, meaning retirement for all the elephants who are forced to give rides at Cambodia's famous tourist attraction.
[?https://t.co/wW8OeEBtv8] pic.twitter.com/dXNlp77NFg

According to Metro, Oan Kiry who is the director of the Angkor Elephant Group Committee said that tourists will still be able to see the elephants but they will not be forced to work harshly.

“In early 2020, our association plans to end the use of elephants to transport tourists. They can still watch the elephants and take photos of them in our conservation and breeding center. We want the elephants to live in as natural a manner as possible,” she said.

Campaign group Moving Animals who work to raise awareness of the dark side of elephant rides welcomed the move, calling it a “great relief.”

Fantastic! Ban them all! “Cambodia will ban elephant rides at the Angkor Wat Historical Park in Siem Reap by early 2020.” https://t.co/QaXGQCKiUA pic.twitter.com/JwoDjKCIBX

“The end of elephant rides at Angkor Wat is truly a watershed moment that shows the tide is turning against cruel wildlife tourism,” the spokesperson for Moving Animals said.

“More and more tourists no longer want to pay to see animals in chains or captivity, and attractions where elephant riding continues, need to ban these rides if they are to stay in favor with tourists and animal lovers.”

It is estimated that there are 70 domesticated elephants in Cambodia and experts believe that there are approximately 500 in the wild including 110 living in the Keo Seima Wildlife Sanctuary and nearly 200 in the Cardamom Mountains.

The population of wild elephants in Cambodia and other Southeast Asian countries has been declining over the years due to poaching, deforestation, and conflict between elephants and humans.