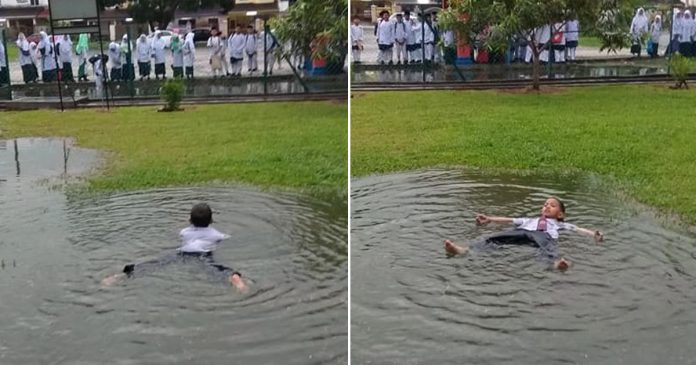 A cheeky boy decided to take matters into his own hands after his mother refused to bring him to a swimming pool.

In hilarious photos shared by Facebook user Rozita Abdul Razak, the boy shows no remorse whatsoever after he was caught swimming in a large puddle on his school field.

According to the post, Rozita who is also the mother of the boy revealed that she was shocked when a teacher told her that her son was playing in the water.

Thinking that the boy’s action might not be something she should be surprised about, Rozita then was startled to see her son was actually swimming in a puddle!

“I was shocked! There was a teacher who told me ‘That’s your son playing in the water!!’, I thought it was just a little bit but turns out he was swimming! His elder brother confronted him but ended up getting chased. When I asked him what he was doing, he answered ‘Mum, you never take me to a pool!‘,” Rozita wrote in her Facebook post.

“I didn’t chase after him. He would have run the entire perimeter of the school and I would have gotten tired. It was even more fun considering he had a large audience. #Child God’s gift.”

Apparently, the boy had too much fun swimming in the puddle that he completely ignored everyone who showed up near the puddle to see his antics!

When the post made multiple rounds on the internet, many people were amused by the boy’s action as they were reminded of their childhoods.

Some users commented that the boy should continue to enjoy his childhood as he would miss it later when he becomes an adult.

“Keep it up kid, you’ll miss your childhood when you’re big,” the user wrote.

There are also some users who offered the boy a free trip to the island so that he could swim to his heart’s content! “We want to offer a FREE trip to the island for you and your brother. Then you can swim until you’re satisfied,” the comment reads.

While it seems that playing with electronic devices such as smartphones and tabs is becoming a favorite pastime among young children, this boy has proven otherwise.

Obviously, there are pros and cons when it comes to using electronic devices at an early age but playing outside has proven to benefit children in terms of their motor and soft skills.

Here are some of the benefits that your child could gain with just playing outside:

All the running, jumping, swimming and throwing balls contribute to the development of motor skills and also help them to burn calories and strengthen their bones.

It is also a natural and cheaper way for them to absorb vitamin D for stronger bones and reduce the chances of getting chronic diseases.

Playing outside with their peers helps children to improve their behavior and social skills. They will be more attentive, sensitive, creative and inventive to their surroundings.

Children who play outdoor more often show a higher attention span as they are better at focusing on an activity or game compared to children who spend more time indoors.

Plus, they are also more curious and show more ability to initiate or participate in new activities.

Spending time in nature has proven to improve one’s mood and health. Furthermore, being outdoor can stimulate the pineal gland, a part of the brain which helps to maintain the immune system and happiness.

Outdoor play should not become a thing in the past. Encourage your children to play outside or take them to the park more often next time.