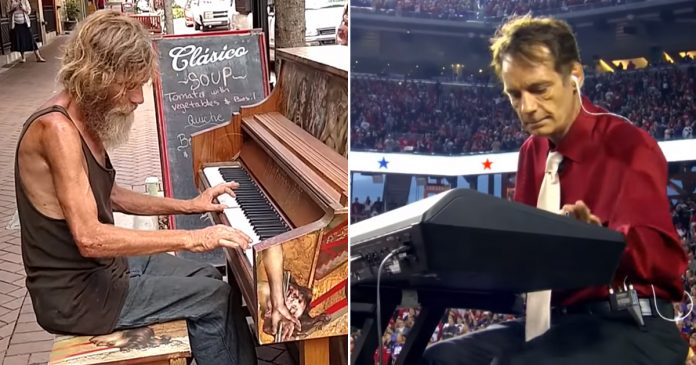 When we see a homeless, we would never think of them as anything special. But this one homeless veteran proves that the homeless is more than what you think.

Donald Gould who’s now in his 50s was a full-fledged talented musician. But nobody knows about that. Not until the local government’s project to bring more music to the community came through.

Established by the Arts and Cultural Alliance of Sarasota County, the Sarasota Keys Piano Project wheeled in a few pianos around downtown Sarasota in 2015 for the public to play.

And Gould would never miss playing that for anything.

This homeless vet has an extraordinary talent at playing the piano. With the right opportunity Donald Gould wouldn't be…

Originally from Michigan, Gould immediately tried his hand on one of the pianos when he saw them. Wearing nothing but an old singlet, a pair of jeans and a disheveled hairstyle, Gould sat down and play Styx’s ‘Come Sail Away’. His impromptu performance caught the eyes of the crowd and the start to his new life.

According to Inspire Story, Gould majored in music in college and played the clarinet for the US Marine Corps and is adept at the drums.

Despite only learning it in his youth, those skills clearly never left him.

“From the piccolo all the way down to the tuba, I had to learn how to play every instrument,” the homeless man was reportedly telling a few young people who stopped to appreciate his playing.

Thanks to the cellphone footage of him playing the piano including an interview that racked up almost 3 million views, Gould started receiving job offers, including an offer to play the National Anthem at a San Francisco 49ers game before 70,000 NFL spectators.

The once-homeless man did not only became a sensation locally but internationally as well—leading to his new love. Sabine Perez has a handicapped son and really wished for Gould to play him some beautiful music. She wrote him a message, and he answered her back about seven months later.

As the rest is history, Perez is now Gould’s partner.

Remember the once homeless street pianist in Sarasota? We just checked in with Donald Gould, and his story keeps getting better! Here's the latest: https://buff.ly/2hkPKVM

The couple performs together in Germany where they currently live, have featured on German TV and are doing recordings together. With his newly found success, Gould never forgets what made him the man he is today.

In 2017, Gould returned to his same lucky piano and played ‘Come Sail Away’ there once again.

From homeless to successful and found new love, Gould’s life story is the one we would want to remember forever. Watch his story here: