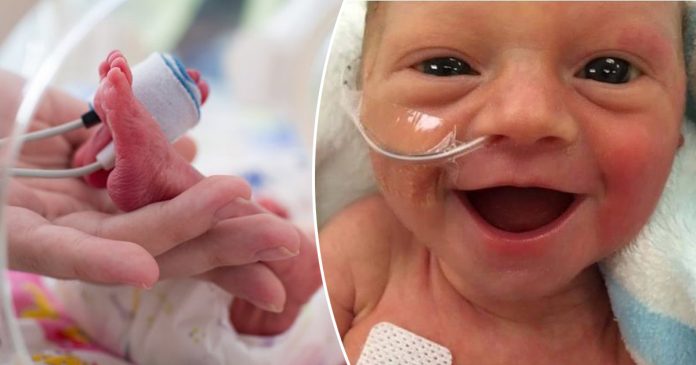 As parents, there’s nothing they want more than a healthy child. Having a premature birth and seeing your child struggling to be alive is definitely terrifying especially for first-time parents.

Just like she knows how her parents would be worried about her and not sure if she can make it, this baby girl in Minnesota seems like she knows exactly what to do. Precious daughter to Lauren Vinje and her husband, David, the baby girl called Freya was born several weeks premature, hooked up to breathing machines and feeding tubes before her parents bring her home.

Vinje developed preeclampsia, a serious pregnancy complication characterized by high blood pressure at 28 weeks of pregnancy and had a difficult birth story.

“Everything was going great up until that point,” told Vinje.

“I knew something was wrong. When I got so swollen I couldn’t fit my hands together around my ankles. Then I started seeing flashing lights.”

Despite that, the strong mother made it through to 34 weeks under the advice of her doctors—but her worries didn’t stop there. Vinje was induced but she learned that Freya had turned sideways—so she would have to be delivered by emergency section. After a hard time in the labor, Freya finally emerged. She looked small and fragile but proved that she’s a fighter from the get-go.

“She was perfect, ours, and worth every single thing we went through to bring her into this world,” told Vinje.

Despite being born prematurely, what happened five days later brings hope to all the anxious first-time parents. Freya was beaming with a smile on her bed in the NICU and that adorable moment was caught on camera.

As Vinje shares the photo of her daughter’s million dollar smile on social media, it has now gained more than 317,000 likes.

"Our first daughter at five days old. 3 lbs. 14 oz., she was happy to be alive! This picture was one I looked at often…

“I wanted to get the picture out there because it has brought us so much joy. It puts a smile on our faces and we thought it could do that for others as well. She’s a constant reminder to keep things in perspective and stay positive,” told Vinje to People.

Looking at the photo, a lot of parents were inspired by Freya’s strong will and successful journey. They have been sharing the photos of their premature babies too!

and a reliable big sister!

Are you the one? 26yo millionaire is paying for a new...