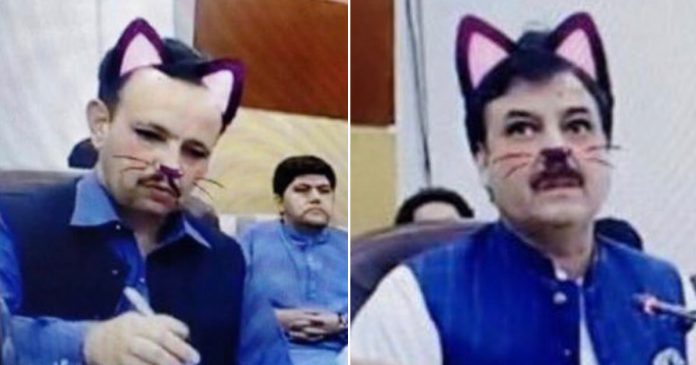 The last thing a press conference attended by all high-ranked government officials needs when it is broadcasted live on Facebook is a cute cat filter but that was what happened recently in Pakistan.

In an incident in which the country’s ruling party has clarified that it was “human error”, the cat filter was switched on by mistake by a “hard-working volunteer”.

It happened when Pakistan’s regional minister Shaukat Yousafzai was speaking with journalists.

It may have looked nothing extraordinary in real life when the meeting was in progress but everything that netizens saw online was cat ears and whiskers.

The Pakistan Tehreek e Insaf party (PTI) said that the cat filter was removed within a few minutes after they noticed the mistake and that “all necessary actions have been taken to avoid such an incident in future”.

“The cat filter was turned on by mistake, let’s not take everything so seriously,” Shaukat Yousafzai spoke to AFP.

“I wasn’t the only one – two officials sitting along me were also hit by the cat filter,” he added.

However, it was long enough for netizens to flood the stream with comments such as “ (There’s) a cat in the cabinet,” and “Shaukat Yousafzai looks like a cat – Meow meow meow.”

Pakistan's ruling party shared a government live on Facebook, but accidentally added a cat filter onto it. This was the result. ?? pic.twitter.com/XGtiGYo2De

Journalist Mansoor Ali Khan even wrote, “According to KP government’s social media team we now have a cat in the cabinet #filter”.

According to KP government’s social media team we now have a cat in the cabinet #Filter pic.twitter.com/LNl7zwOfLU

Twitter user @RuralHuman commented, “I propose all parliamentary proceedings around the world to be recorded with cat filters. Please start with the British Parliament!”

I propose all parliamentary proceedings around the world to be recorded with Cat Filters. Please start with the British Parliament! @HouseofCommons @UKHouseofLords @UKParliament https://t.co/7vAJRcEN3m

It may have been an honest mistake but it seems like all of the screenshots with cat filter from the official meeting will stay on the internet forever.