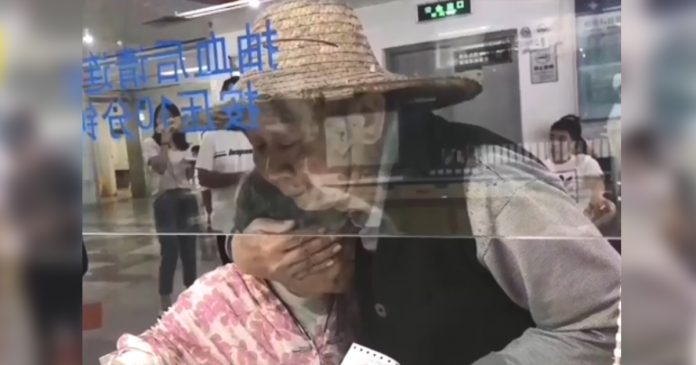 Love in old age is something that we rarely see around us but that does not mean it does not happen like this lovely elderly couple from Shenzen, China who shows what true love truly is.

According to the video from Pear, the elderly couple in their 70s went to the hospital in Shenzhen for a blood test.

The grandfather accompanied his 70-year-old wife to take a blood test as part of her routine diabetes check-up.

However, the terrifying sight of the sharp needle immediately filled the nervous grandmother with terror.

Scared and anxious of the needle, the grandmother probably told the grandfather that she was afraid of getting her blood drawn.

Upon seeing how terrified his wife was of the needle, the loving grandfather quickly took her into his arms and covered her eyes as he said words of encouragement.

“Don’t be afraid. It won’t hurt,” the grandfather said to the grandmother.

The grandmother may be in her 70s but that did not stop the grandfather from comforting and assuring his wife as if she was a little girl!

Apparently, the grandmother was not the only one moved by the grandfather’s supportive act.

All of the nurses present during the blood test were in awe of the elderly couple’s romantic act including the netizens when heartwarming footage of the couple went viral on social media.

Some users even commented that they could die without regret if they could find such love in their lives while some were envious of that romance was still alive and well in the elderly couple’s relationship.

A Malaysian smoker shares his incredible experience on how he managed...