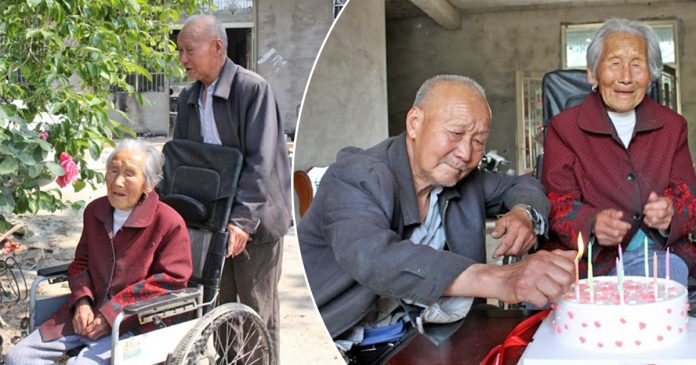 A 110-year-old woman was in for a pleasant surprise on Mother’s Day when her son decided to plan something special for the occasion.

When social workers paid their usual visit to the elderly woman, they were accompanied by her son, 79-year-old Ma Jiyu, holding a cake box. It was Mother’s Day and to mark the special occasion, he decided to surprise his mother.

She was completely oblivious to what her son had planned. The elderly woman who was dressed neatly and sitting in her wheelchair became overwhelmed at her son’s gesture.

He walked in with a social worker and he was holding a cake box while sporting a wide smile.

Ma Jiyu opened the cake box to reveal a charming cake with white icing and pink polka dots. He topped it off with a few candles for his mother to blow out.

He said to her, “Today is Mother’s Day and I wanted to thank you for raising me.” Tears of joy streamed down her face as she heard this. She says, “My son who is 79-years-old looks after me every day and I have a community who cares for me and visits me often. I’m old and have to depend on them but I’m so grateful for their care.”

Ma Jiyu fed his mother the cake and said, “You are my mother, it’s my responsibility to care for you, I will always be your little boy.”

They then spent the rest of the day together outdoors, basking in the sun and looking at the flowers that thrive in their garden.

There is nothing greater than the relationship between mother and child, no matter how old you get.