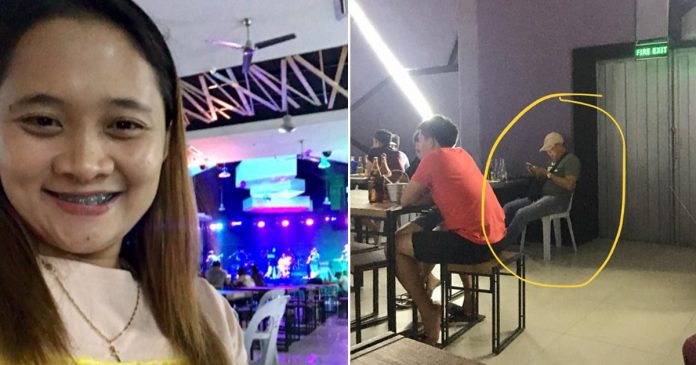 To our parents, we’ll always be their baby—we’ve heard this so many times. But this father from the Phillippines proves that his daughter will always be his baby even if she’s already 24 years old.

A lady from southern Phillippines, Xiannie Delfin went viral after sharing about her ‘overprotective’ and sweet father on Facebook. It turned out that his father accompanies her to a bar party just to keep her safe.

Delfin attended a bar party but her father decided that he needed to protect his daughter by all means—so he followed her there.

“My father is so ‘overprotective’. I feel sorry for you because you look quite lonely there, dad. Even when I’m already 24 years old, it looks like I have a bodyguard with me.”

Her father also sits far away from her group of friends and even pretended that he didn’t know them to let them have fun on their own—while he still kept a watchful eye. If his daughter’s get drunk at the end of the party, he knew that he’ll be there to get her back home safely.

He even pretended that he didn’t know his own daughter and her friends.

Not only that, but the father also ordered something and texted his daughter that she can have it with her friends too—and of course, he paid for it.

After her posting, a lot of people commented that they wished that they have parents like her too.

Some people might think that her father is too strict for accompanying his grown-up daughter to the bar with friends, but he’s just like any other parents who want their child to be safe.

He’s the coolest dad ever!