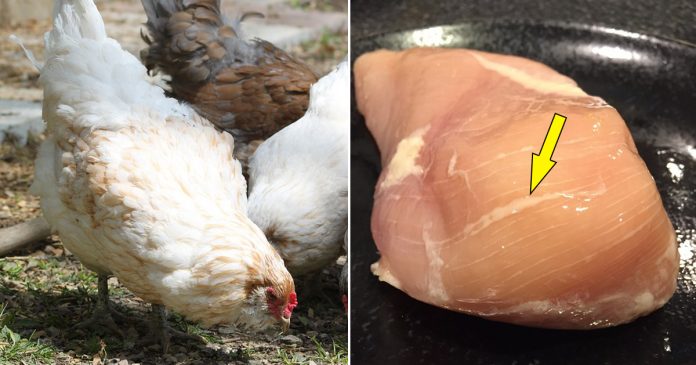 The meat of a raw chicken is usually pinkish in color but some of you may have noticed thin white strands in the meat. Researchers suggest this is far more serious than we realize.

It is always good to keep up with the latest studies on food so you can make informed decisions about what you consume. A study published in the Italian Journal of Animal Science found that chicken meat with these white stripes has a high amount of fat, sometimes reaching over 224% more than normal.

The white strands in chicken breast fillets may be caused by a muscle deformity.

They deduced that these stripes are the result of current farming methods and breeding techniques that are aimed at promoting faster growth in chickens. These methods also result in the birds gaining more body weight in a shorter period of time and this can lead to a muscle disorder found in most modern hybrid birds.

The high-energy diets they are put on and lower mobility are some of the causes linked to the disorder.

The study compared chickens and turkeys from 50 years ago to the ones of the present day and noticed some shocking disparities. The birds of today grow to 6 pounds in half the time that was required before and are sold at double their body weight because they are put on high-energy diets.

This practice that stemmed from the ever-growing demand for poultry might have led to a muscle disorder.

This has caused a decrease in muscle and an increase in fat subsequently leading to the development of white stripes in chicken breasts.

The study also revealed that chicken meat suffered a loss of nutritional value over the years signifying the gradual decrease in the meat’s functioning proteins.

Although this white-striped meat is believed to be safe for consumption, the taste is compromised as they are tougher and often being called “woody”.

It is also believed to be less flavorful and harder to marinade.

As of now, a more recent study claims that the formation of white stripes only impacted approximately 12% of the fillets which means it is enough for consumers to actively choose fillets that does not have these stripes.

If given the choice, would you buy the white-striped meat?

A survey carried out by the University of Arkansas and Texas A&M showed that 50% of consumers wouldn’t buy chicken with noticeable white striping.

Children under 2-yo shouldn’t use phone. 500k people might go blind...