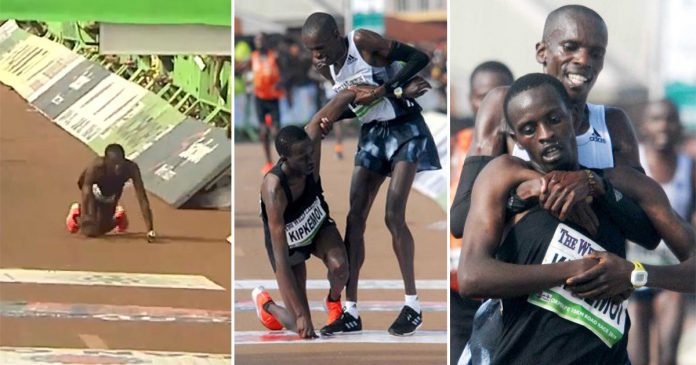 A Kenyan athlete chose compassion over winning when he decided to help a rival who collapsed on the track. He may have lost the race but a bigger reward was waiting for him!

Simon Cheprot was set to win his second Okpekpe Race Champion title when he entered the 2019 edition of the IAAF Silver Label Okpekpe International 10-kilometer race in Nigeria.

As Cheprot kept his pace steady and strong throughout the race, many guesses that he would be the champion that day.

However, that was before he saw another runner, Kenneth Kipkemoi collapsed on the track just a few feet away from the finish line.

Had no one helped Kipkemoi finish the race, all of his hard work would have gone entirely in vain despite being just a few feet away from the finish line.

So, Cheprot did what he thought was the best. He stopped and helped Kipkemoi finished the line.

The two runners eventually managed to finish the race together.

Even though Cheprot did not win any medals, he did not regret his decision. “Running is not war; running brings peace, unity, and friendship,” Cheprot said.

“My dad told me one day, ‘When you’re walking and you meet a sick person on the road, help him; do not leave him’, so that was the first thing that came to my mind when I saw my friend on the ground.”

Cheprot may have lost the race but he was later awarded more than Sh1 million (US$15,000) by a race partner, former Edo State Governor Adams Oshiomole and Deputy Governor of the state, Philip Shaibu!

This athlete Simon Cheprot forfeited his win at Okpekpe Int'l 10KM Road Race in Nigeria on Sunday to help his friend & track rival Kenneth Kipkemoi who collapsed a few metres from the finish line! Race organizers & IAAF rep awarded him with Sh1 million each for his #ActOfKindness pic.twitter.com/m00Rv4ZUUt

“This is what is called sportsmanship. Simon gave proper consideration for fairness, ethics, respect, and a sense of fellowship with his competitors. He is our hero, he is the hero of the seventh edition of the race,” the race announcer MikeItemuagbor said.

Watch Cheprot’s selfless act in the video below: