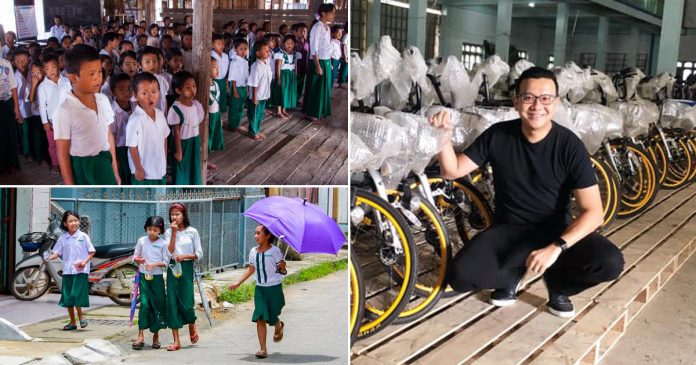 In Asian countries like Malaysia and Singapore, the bike sharing concept service was especially popular when it first emerged. Unfortunately, it failed a few years later. Thanks to this, piles of bicycles were left behind—some are new, while others are missing some parts.

Looking at this rather serious issue, a business school graduate, Mike Than Tun Win, determined that he can do something better with all the abandoned bicycles and decided to give them a new lease of life.

Mike who has been studying and staying in Singapore for 18 years finally returned to Myanmar in 2011 and started a tech company.

He has seen under-privileged students in Myanmar walk up to an hour from home to school.

As dumping them will be a big waste, Mike figured that these bicycles can still be useful to less-privileged people in the world.

“It’s probably sad that richer nations might not know how to treasure such a simple necessity but to people in need, it can be a huge impact and even life-changing,” said Mike.

A new bicycle might cost between US$150 and US$200, while the ones from bike sharing companies like oBike, ofo, and Mobike are to be scraped off and sold to recycling plants as they are no longer in use.

This gives Mike an idea and started a movement called lesswalk.org to redistribute unused bicycles to poor students in Myanmar.

For a start, Mike aims to buy and import bicycles to poor students from grade seven to ten and those who live within a walking distance of 1.24 miles from their schools.

According to Mothership.sg, the logistic cost of buying to sending the bicycles to the receivers in rural villages is about US$35 to US$40. Fortunately, 50 percent of the cost of this project is covered by sponsors that Mike managed to secure.

Some of the ofo bikes come from Singapore while the rest are not.

He also shares that some modifications will be made before distributing them to the beneficiaries. The digital locks on the bicycles will be replaced with normal chain locks with keys and they will add an additional seat at the back too so that siblings can cycle to school together.

Hopes that this project will inspire more people to do the same and help those in need, Mike will continue his effort and planning to source for excess bicycles from countries like China, Japan, Taiwan, and the Netherlands.

So far, Mike and his team have already imported 10,000 undeployed bicycles in perfectly new conditions to Myanmar.

For those who are not familiar with the bicycle-sharing concept, it is basically a public bicycle service where they are made available for shared used on a short term basis for a small fee.

Many students will certainly thank Mike for helping them to go to school. Well done, Mike!