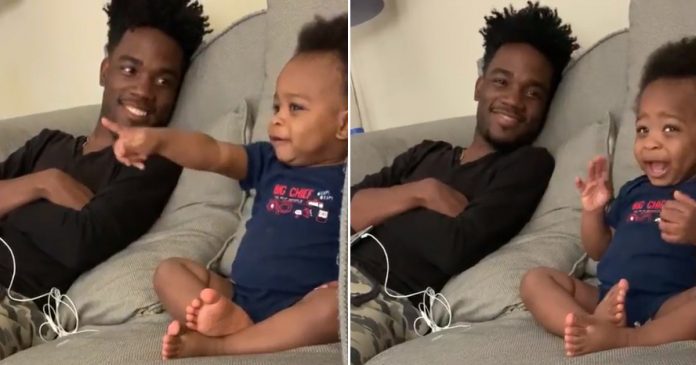 Most parents probably agree that sometimes all they want in life is just to have a baby that can talk and tell them when they’re hungry or want a change of diaper. But this dad clearly has no issue with that because he’s chatting just fine with his little baby.

Didn’t let age stand in the way when he’s having a talk with his baby, comedian DJ Pryor had a full grown-up conversation with his 18-month old son and it’s probably the cutest thing you’ll see today.

Despite only knows how to babble, the little guy Kingston Jierre is not stopping at all and continue holding the conversation with his father.

Being a talkative one, the baby mostly saying inaudible words but his reaction, expressions, and gesture to his father’s words really say it all. Having to be able to share your feelings on how your day is with your toddler that seems to fully understands everything you say is probably the best feeling ever!

“They need to work on that!” said the father, which was adorably agreed by the baby.

“We think a lot alike, huh?” added the father.

They surely had a lot to discuss.

Looking at the cute conversation the father and son duo is having, the baby’s mother Shanieke Pryor decided to share the cuteness to the world and posted the video on Facebook. The adorable clip quickly went viral with 53 million views, almost 1.5 million shares, and 1 million likes on Facebook just a few days after it was posted.

As the video was all over Twitter as well, our favorite Captain America Chris Evans can’t help to tweet about the adorable video too, with a sweet comment.

I could’ve watched an hour of this https://t.co/T6YW5Gb7lz