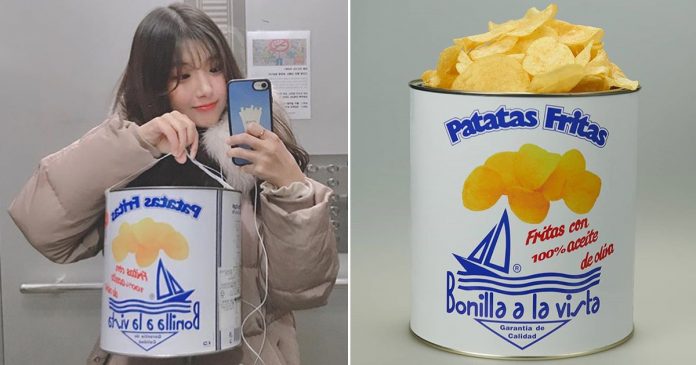 At first glance, it may be odd to see people carry a bucket of paint in the public for no reason.

However, do not be quick to judge as this bucket of paint is actually a can of potato chips!

Also known as potato chips in a paint bucket, Bonilla a la Vista potato chips has been enjoying rising popularity in many countries thanks to its unique packaging.

Bonilla a la Vista potato chips was first founded by Salvador Bonilla in 1932.

Bonilla set up a small shop in the town of Ferrol and began selling churros and potato chips in white cans.

However, it was not until Ihsan and Valerie Gurdal, the owners of Formaggio discovered the striking white cans of potato chips which Bonilla sold at his shop that the Spanish brand became popular among potato chips lovers in the United States.

Using just fresh olive oil, salt and Kennebec potatoes, Bonilla a la Vista quickly emerged as the top brand for potato chips in Spain as well as in Europe.

Now, Bonilla a la Vista potato chips are sold widely in many countries including the United Kingdom, United States, France, Australia and even in South Korea.

Even though a can of Bonilla a la Vista potato chips are sold at a relatively higher price than most potato chips brands at $27.95 for a can, it remains a favorite across the world thanks to its aesthetically pleasing white can.

The white tin can of the potato chips is popular as many people utilize it for interior decorating purposes.

Plus, it also makes a unique prop if you are after an Instagram-worthy photo!