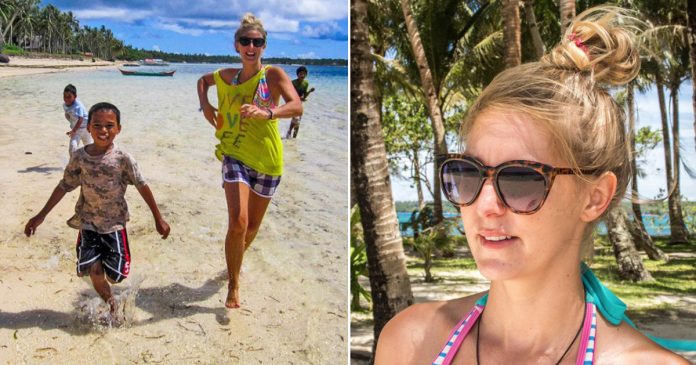 Sanne was 25 years old when her life became so hectic that she could barely get a rest to the point that it nearly cost her life.

Then, she made a drastic decision to leave everything behind and start a new life in a different country, the Philippines.

Sanne was a 25-year-old student at The University of Skövde, Sweden. At the same time, she was also working as a project manager at a Stockholm clothing company while also running her own company.

Adding to her impressive resume, she also lectured all over the country!

“I had too many things going on at once and was never satisfied,” Sanne said.

After years of living a busy life with minimal rest, Sanne finally showed signs of fatigue. She could not tolerate being alone and had trouble sleeping at night.

“I was smoking at the time and I couldn’t go out for a cigarette and be calm amid the two minutes it takes. I had a panic attack. It was so quiet and I felt like crap. At that point came the feeling that I couldn’t live like this any longer,” she said.

Then, in 2012, she was involved in an accident where she fainted in her vehicle and drove off the street. Luckily, she was not injured during the accident.

That was the turning point in her life and Sanne later decided to make a decision to regain her health and herself by leaving all behind.

The next day, she quit her job and decided to move to Manila based on her Facebook friends’ suggestions. A friend that she went for a backpacking trip told her that she had moved to Manila and stayed there for free.

Sanne then made up her mind and four weeks later, she arrived in Manila.

As soon as she landed in Manila, she fell in love with the region so she decided to stay there for good. Following her decision, Sanne then sold everything she owned back in Sweden and opened a hostel in Siargao Island.

According to her, her new life has been a complete opposite of her busy life in Sweden.

“At home, I didn’t feel anything. I was living with a constantly high level of stress. I’m much more in tune with my emotions here, and I like that side of me. I want to be genuine. I do not want to be perfect. I just want to be me”, she said.