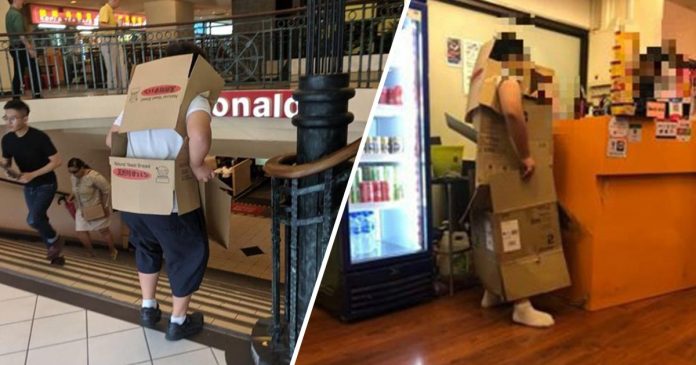 Long before we have smartphones and gadgets, the cyber cafe is our magical land. But as a school student, it’s not easy to get in that territory when you have your school uniform on.

Not risking going back home to change his uniform and jeopardizing the fun ahead of him, one boy comes up with an interesting idea just to get into the LAN shop. As told by an Instagram user named Terenex in her Instagram stories, she stumbled upon this boy on his rather creative adventure to the world of cyber cafe.

Happening at Park Lane Mall in Singapore, Terenex witnessing a boy asking for some cardboard boxes from the nearby shops and proceed to wear the two boxes around his body.

“I was going to pack my lunch with my colleagues at Parklane at around 12:45 PM when we saw a kid in his school uniform trying to fit himself into two boxes,” told Terenex recalling the incident.

“Funnily enough, the box was angled right at his butt and said ‘Yeast bread’,” added Terenex.

At first, Terenex was confused as to why the boy was doing this. But later she realized that he wanted to get himself into the cyber cafe and waddled his way there.

“We were confused for a moment, then we saw him waddling towards a LAN shop and realized he was trying to get in. The box disguise was to hide the fact that he was wearing a school uniform!”

“Super innovative. He even made a hole for his arm to go through.”

Terenex and her colleagues proceeded to lunch and didn’t get to see if he really got in. But luckily, they stumbled upon the boy once again after their lunch.

This time the boy added one more box on his body.

“We caught him in the midst of waddling back into the shop, only this time there is a third box in sight, covering his pants. We saw him standing in the shop speaking to the shop keeper. We’re not sure if he was successful, but he was certainly an inspiring figure for us all for his relentless perseverance and creativity.”

Thanks to a Mothership reader called Joel who’s at the gaming site, we get to see how the incident took place from the inside as he shared the photos.

This is when he’s just wearing two cardboard boxes.

Failed his first attempt, he came back with another box to cover his shorts. We can’t tell there’s school uniform under there, at all!

After his second attempt, it is unknown if he manages to get into the cyber cafe or not.

Whatever it is, he’s our icon of persistence when it comes to chasing our dreams!