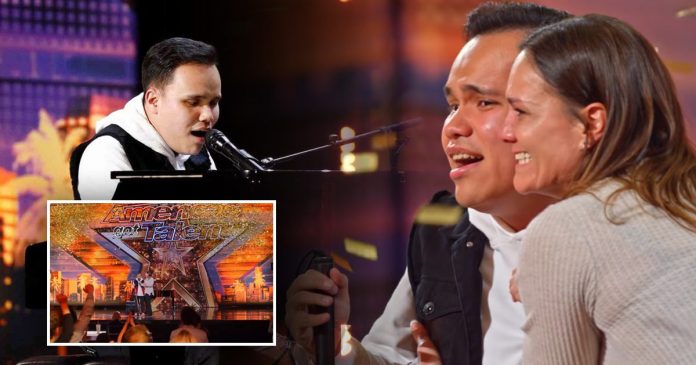 Being talented is like getting a gift from God. But being autistic, blind and talented is definitely on a far different level.

Recently, a contestant of America’s Got Talent went viral after performing a mindblowing performance despite being autistic and blind. The 22-year-old Kodi Lee managed to receive his Golden Buzzer from one of the judges after his amazing performance that blows the audiences.

Kodi Lee is blind and autistic.

He got on the stage with his lovely mother.

Showcasing his amazing piano and singing skills, Kodi’s performance on YouTube was viewed for more than 20 million times and got almost 800,000 likes. Appear on the stage with his mother, Kodi attracted the audience with his interesting character and proceed by telling the judges that he will sing a song on the piano.

Not expecting his overflowing talent, both the judges and audiences were fascinated by Kodi’s singing voice accompanied by his melodious piano.

He played the piano and sang the song ‘A Song For You’ by Donny Hathaway.

Golden Buzzer was given once for each judge and the judge Gabrielle Union decided that hers is for Kodi. Touched by his beautiful performance, Gabrielle Union told the talented young man that she will give him a very special gift and proceeded to push the Golden Buzzer.

With the Golden Buzzer given by the judge Gabrielle Union, Kodi will get to perform live after this.

It was such an emotional moment and definitely the moment Kodi has been waiting for.

We wish you all the best, Kodi!

This child of God is a prodigy. Autism and blindness can’t erase the smile from the face of Kodie Lee! Kodi has just given HOPE, POWER, and HAPPINESS to those who feel marginalized because of who they are. Erase the DIS, and highlight the ABILITY! Gabrielle Union, GREAT FIRST TIME USE of the #GoldenBuzzer! #AGT