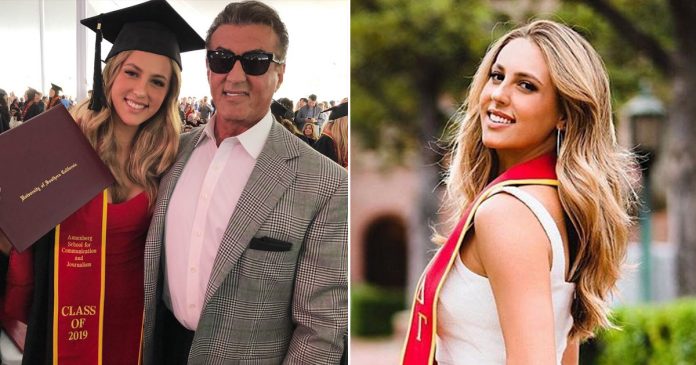 Sylvester Stallone is one proud father as his eldest daughter, Sophia graduated from the University of Southern California recently.

Sophia whom the actor shares with his wife, Jennifer Flavin studied at the Annenberg School for Communication and Journalism.

In an Instagram post that Stallone shared recently with his 9.5 million followers, the proud father can be seen beaming with pride as he poses for the camera with Sophia who proudly wears her graduation cap and shows off her diploma.

“Our daughter Sophia graduates from USC!! An absolutely amazing day for us all. So proud!!”  Stallone wrote in the caption.

Sophia later commented back, saying, “Love you dad!! Couldn’t have done this without you and mom!!”

Sophia and her 72-years-old famous father are obviously two peas in a pod as they not only resemble each other but also share the same love of reading.

Sophia’s mother, Flavin joked with Paris Match about her daughter sharing a striking resemblance to Stallone. “Like him, she has read nearly all of Shakespeare’s books,” Flavin said.

“They have a very special bond, they think alike. Sophia is the love of his life.”

Stallone has always shared photos of him and Sophia regularly on his Instagram like this one here when the 22-year-old beauty visited her father on the set of Creed 2.

Other than Sophia, Stallone and Flavin also have two other daughters, Sistine and Scarlet, and two sons, Sage and Seargeoh who are equally stunning on their own.

Congratulations on your graduation, Sophia!

Lady with the longest legs in America was bullied as ‘giraffe’—but...