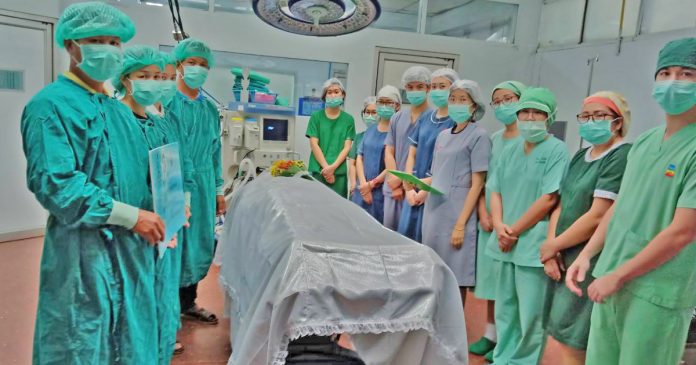 After learning that he was going to be paralyzed for the rest of his life after a tragic accident, 18-year-old Phongsathorn Amwet decided to become an organ donor. 3 days later, his last wish came true.

In a tragic accident which occurred recently in Bangkok, Thailand, Phongsathorn was severely injured and he suffered from a concussion during the car crash.

Thankfully, he was quickly rushed to the Chiang Rai hospital where he underwent surgery.

Unfortunately, the young man was later told that he would be paralyzed for the rest of his life due to the serious injuries he sustained following the accident.

Brokenhearted by the unexpected news, Phongsathorn was devastated but then, he told the doctors that he wished to donate his organs after he passed away.

Just three days later, Phongsathorn passed away and his family was informed about his decision to become an organ donor.

His family especially his father, Vachala, 56 was not keen to know his late son’s wish to donate his organs at first.

However, as they later were told that Phongsathorn’s donated organs could go on to save at least a number of lives, they finally understood his wish.

Following his death, Phongsathorn’s heart later went to a patient who suffered from heart failure while his kidneys saved two patients who had kidney failure.

Meanwhile, his liver saved another patient and his corneas saved two blind patients.

Currently, there are 6241 patients who are still waiting for an organ transplant of which 6,000 of them in need of kidney transplant while the others are in need of new liver, heart, and lungs.

However, there are only 111 people who donated their organs in 2019 and only 255 patients managed to undergo an organ transplant.

Phongsathorn may have died from a terribly devastating accident but his death definitely did not end up in vain. Even in the afterlife, he managed to save six other lives thanks to the organs he donated.