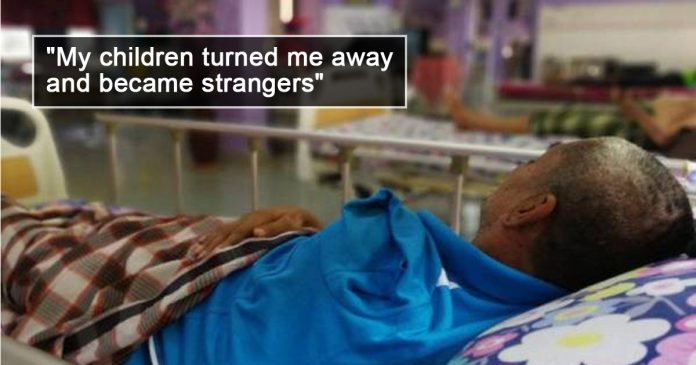 Once loved and cherished, a 46-year-old father is now abandoned by all of his children after he became paralyzed following a stroke.

Now, the heartbroken father is staying at Rumah Ehsan, a charitable care facility dedicated to elderly citizens in Malaysia.

According to Sinar Harian, the man who only wished to be identified as Awang had once served in Malaysian Armed Forces as a sniper.

After retiring from the military 10 years ago, Awang earned a living as a rubber tapper and lived a modest life as he raised his four children.

Unfortunately, when he became paralyzed two years ago, that was when his children, three sons and a daughter, stopped taking care of him and abandoned him altogether.

“My wife passed away a few years ago and my health started to deteriorate then. I have been suffering from asthma and high blood pressure before the stroke struck me,” Awang said.

“I really regret spoiling my children. There was a time when I spent RM10,000 (USD 2391) for their weddings but when it was my turn to need help to go to the clinic, none of them was willing to help me out,” he explained.

“All the excuses they gave was that their wives did not allow them to help me.”

According to Awang, he also bought cars, motorcycles and supported them financially even when he did not earn much as a rubber tapper. “But when I am paralyzed, my children turned me away and became strangers,” said the broken-hearted father.

He added that he had lived in the home of one of his children before being taken to a hospital in Kuala Lumpur to undergo a follow-up treatment for his stroke.

However, what he initially thought was just a short stay turned out to be longer than he expected. Before he realized it, Awang was actually abandoned at the hospital the minute his child dropped him at the hospital.

“None of the children has ever come to visit me, not even during the fasting month and Eid al-Fitr last year. In April, I was taken here (Rumah Ehsan) and I no longer have any love left for my children.”

“Even when I passed away later on, please don’t tell them because I don’t want to think about them anymore,” Awang concluded.

Awang may be paralyzed but that does not mean that he is not capable of loving his children. Unfortunately, he has no options but to mend his broken heart and move on with his life when his children chose to abandon him.