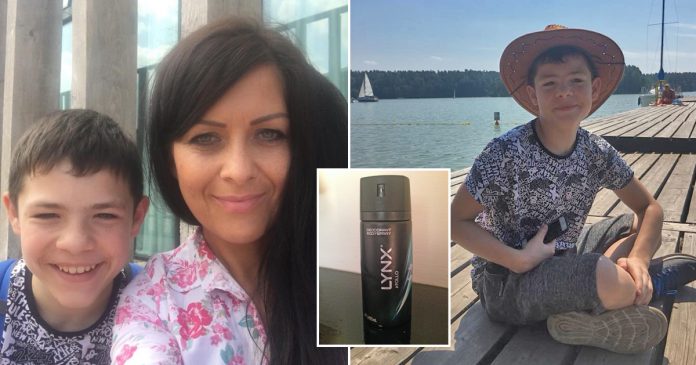 13-year-old Kacper Krauze had been comatose for three weeks until his mother brought the deodorant he used every day into the intensive care unit that he finally woke up.

According to Daily Mail, the schoolboy was fighting for his life after he was found submerged underwater for 25 minutes in February this year.

Kacper went paddling with his friends in the River Eden, Cumbria when the outing suddenly took a tragic turn.

He later ended up completely submerged in the river’s freezing water since he was unable to swim.

Eventually, emergency services managed to pull him out of the water and the medics from the Great North Air Ambulance immediately worked to resuscitate him.

They managed to restart his heart but since he was deprived of oxygen after being submerged in water for 25 minutes, Kacper went into a deep coma.

He was then taken to Freeman Hospital in Newcastle where he stayed in the intensive care unit.

Three weeks later, Kacper was still fighting for his life in a coma until his mother brought his deodorant to the intensive care unit. The deodorant was the same one that he used every day prior to the accident.

His mother, Mrs. Krauze, 43, said that a nurse suggested for her to bring Kacper’s toiletries to wash him with.

“We had tried everything to wake him up. A nurse had suggested I bring in some of his toiletries to wash him with,” Mrs. Krauze said.

“As soon as I spayed the Lynx (deodorant) he opened his eyes immediately. He must have remembered that was his favorite smell.”

“It was a miracle,” she added.

According to Mrs. Krauze, Kacper has always used the deodorant and he still uses it to this day.

It was still a great surprise to their family that Kacper woke up from a coma after smelling his Lynx deodorant.

“We had tried so hard to get him to wake up from his coma. We had played music, we had spent hours talking to him,” she said.

“But in the end, it was the Lynx which did it. I just couldn’t believe it.”

At the moment, the schoolboy still struggles with his speech and using his right arm but apart from that, he has made a full recovery.

As for Kacper, the surprising revelation has also surprised him. “I have always absolutely loved Lynx. It’s my favorite smell. It always has been. I never thought it would bring me round from a coma,” he said.

“I will continue to wear it now, always. It’s my lucky charm.”

Mother of two shows just how much society’s preference for light-skin...