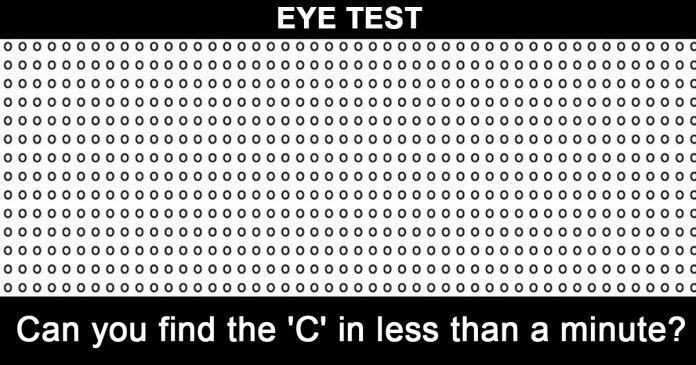 Optical illusion test like this is simple but challenging as you need to spot certain thing in under less than just a few seconds. For this eye test, it was claimed that apparently, 99% of people can’t solve it in less than 7 seconds.

That means only 1% of adults can solve it under less than 7 seconds. The challenge in question is based around a large grid filled with rows of the letter ‘o’—and you need to locate only one letter ‘c’ in between them all.

This test has been around for a couple of years, but it recently emerged again and ready to leave people helplessly looking for that one letter that is different from the rest.

Ready to join the 1% that can spot the letter C among the O’s in less than 7 seconds?

The easiest method to do it is to scan through the picture line by line until you hit upon the row hiding the letter ‘c’. However, anyone can do this—so it doesn’t qualify you to be those among the 1%.

So prepare yourself for what you’re looking for before you cast your eyes on the image. Avoid focusing on any particular area of the grid as it might slow you down when looking at the wrong area. It can make you dizzy too!

Did you find the letter ‘c’? If you managed to find it under less than 7 seconds—well done, your mind and eyes are in fine working order!

People on the Twitter claiming that you might be a genius if you find it under 7 seconds.

Can you spot the 'C' in this brainteaser in under 7 seconds? If so, you might be a geniushttps://t.co/O0K4Bd4x4j

It took me less than a second to find it! According to this article, I might be a super genius ??

If not, don’t worry because it’s not a mark on your cognitive abilities nor your eyesight!