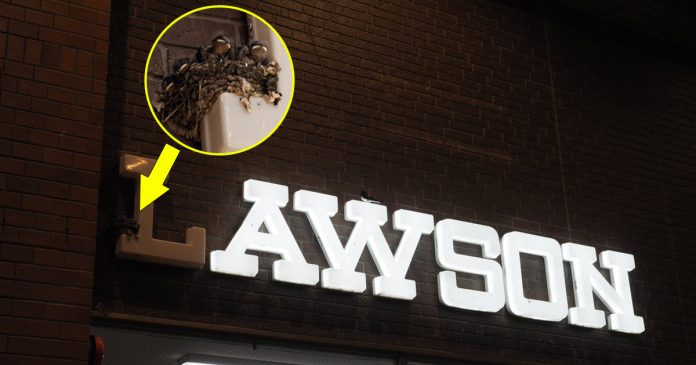 Like most convenience stores that are open 24 hours, Japanese convenience store chains Lawson usually light up their signs at night but not for this particular Lawson store in Ehime prefecture.

Some may have thought that the workers at the convenience store were too busy to replace the broken light but apparently, the light works just fine.

The Lawson branch in the Dogo Onsen area of Matsuyama in Ehime Prefecture deliberately switches off the light of the ‘L’ section of their ‘LAWSON’ sign because of their tiny visitors.

If you look closely, you can actually see a nest full of baby Swallows sitting on the lower left of the ‘L’ sign.

There are at least five Swallow birds inside the nest and the convenience store workers do not want to remove the nest since the chicks are still very young to fly on their own.

So, to allow them to get the sleep they need to grow, the workers at the store turn off just the ‘L’ section of the store’s sign at the moment.

Apparently, the convenience store’s move has received a positive response from the netizens who were touched by their consideration towards the small family of birds.

When photos of the store’s sign went viral on Twitter, they have received 189,000 likes and have been retweeted over 65,000 times!

“That settles it – I’m shopping at this Lawson,” wrote one user while another user commented, “You don’t even have to bathe in Dogo Onsen’s hot spring to feel warm and happy as long as you see this.”

Lawson is already one of the top convenience stores in Japan and thanks to this family of birds, it looks like they will gain more fans!