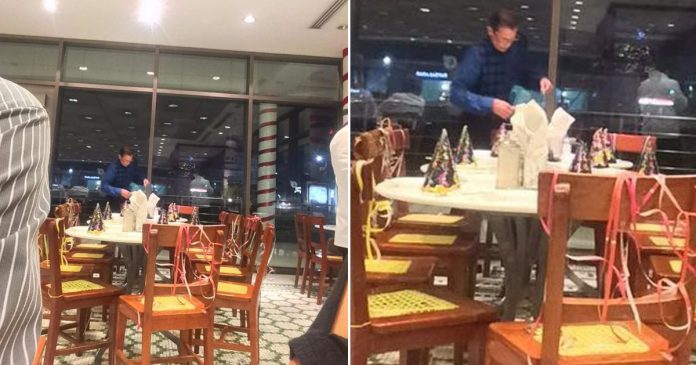 All Eduviges Villatoro wanted for his 61st birthday was to celebrate it with his children and grandchildren and eat some good food. Unfortunately, no one remembered his birthday.

Even worse, none of his family members showed up when Eduviges made a booking at a restaurant in Veracruz, Mexico to celebrate his birthday.

In the heartbreaking scene, Eduviges was left alone with an empty table and a birthday cake.

As other guests enjoyed their meal at the restaurant, Eduviges was still waiting for his guests to turn up. Unfortunately, they never did.

After waiting for so long, Eduviges suddenly stood up and made an announcement. With tears in his eyes, he said, “It’s my birthday today, I’m 61-years-old and I prepared for a feast tonight. I bought a cake because I was supposed to meet my family here to celebrate my birthday.”

“I hoped that my children, grandchildren and my wife would come. But as you can see, no one turned up,” he said according to one of the guests at the restaurant, Patty Rodriguez, who witnessed the heart-rending scene.

“That is why I now ask if anyone wants to join me to celebrate my birthday and sing ‘Happy Birthday’. I would be eternally grateful,” Eduviges continued.

It did not take other guests any further seconds to join Eduviges at his table for his birthday celebration after he made the announcement.

One by one walked over to Eduviges and hugged him.

They even moved several tables together to give the man the birthday party he wanted.

Even though none of the guests had met Eduviges before, all of them showed their support and compassion towards the 61-year-old man.

However, Eduviges later revealed that the birthday party was just a social experiment! It was meant to see how people would react during such situation and it went really well beyond everyone’s expectation.

Eduviges may have done it for a social experiment but it is still nice to see that humanity and compassion are still alive and well in today’s society.