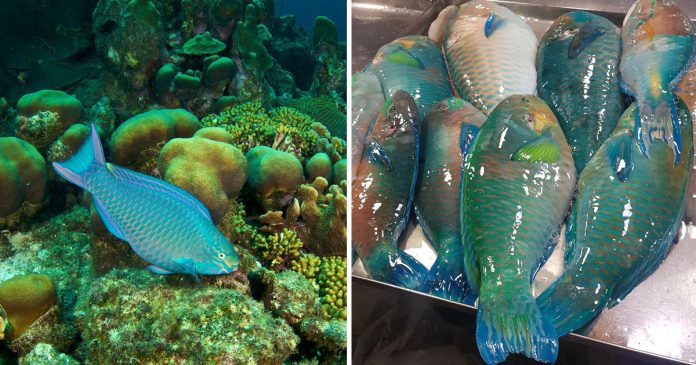 One woman was at the market in Manila for the weekly grocery shopping when she suddenly saw the last thing she expected to see in the fresh seafood section.

In a Facebook post dated April 14 which has since gone viral, user Reg O. Carlotta wrote how disappointed she was to see a stall selling parrot fish among the fresh fish and seafood on display.

“This morning I went to the market (Alabang market) to buy meat and seafood for the whole week since it’s holy week na. I enjoyed my usual chit chat with the vendors and buying from my sukis. On my way out of the fish section I passed a stall that was selling PARROT FISH!!!” Carlotta wrote in her Facebook post.

Carlotta then continued why it is best not to eat parrot fish although it is a gastronomic delight in some parts of the world.

“There are important reasons why we should not eat them and dapat we should educate the fishermen to stop catching these beautiful fish!” she added.

According to Carlotta, parrot fish help save the coral reefs from algae invasion. They also help to eat dead corals and spend most of their days nibbling algae from coral reefs.

In other words, parrot fish help clean coral reefs from being smothered by algae.

“After all that eating, get this: They poop fine white sand – lots of it! Each parrotfish produces up to 320 kilograms (700 pounds) of sand each year,” Carlotta continued.

“Their numbers are so depleted, and algae levels are so high, that they cannot be fished sustainably right now anywhere in the Caribbean. These flamboyant, algae-eating, sand-pooping fish need to be left in the water. And when they are left to chomp away, they do a brilliant job. A massive new report concludes that reefs, where parrotfish were abundant in the 1980s, are the reefs that are healthy now.”

According to Virgin.com, as many coral reefs are dying and algae levels are so high, parrot fish is not exactly a sustainable catch of the day at the moment.

Carlotta then concluded her post by reminding everyone not to consume parrot fish. “Say no to catching parrot fish! Let’s not buy parrot fish so they won’t catch them anymore.

Apparently, there have been quite a few studies that encourage people not to consume parrot fish.

The report said that in parts of the wider Caribbean where parrotfish are protected, there has been some improvement in reef health.

It certainly does not hurt to not eat parrot fish as there are plenty of other seafood selections that we can eat. So, let us do our part to help save coral reefs from dying by not eating parrot fish.