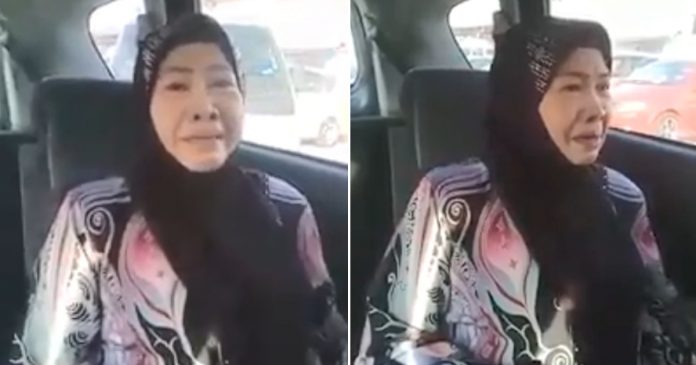 In a touching video that has been making rounds on the internet, a heartbroken mother cries her heart out after her own son kicked her out of the house.

The 6-minute video shows the middle-aged woman sitting inside a car who is believed to be her friend after she had been chased out by her own son after a misunderstanding.

Even more heartbreaking, the mother shares her woes after her daughter-in-law told lies to her son that she had beaten her up after a dispute.

In the video, however, she reveals that the truth was actually the opposite.

It all started off when she told her Indonesian daughter-in-law to throw away some dirty diapers.

According to her, she told her daughter-in-law to dispose of the dirty diapers properly as they would cause health problems to her grandson.

The old woman even reveals that the daughter-in-law had kicked her in the chest and kick her.

At the time, her son was not at home but as soon as he came back, the old woman wanted to tell her son what his wife did to her.

However, it seemed that the daughter-in-law had told the son first and apparently, what she said was not the truth.

The daughter-in-law told her husband that his mother had beaten her up and always treated her badly.

Sadly, the son believed his wife instead of his old mother and he got furious with her. The family drama later saw the son chased his mother out of the house and said, “If you hit my wife, I will hit you back!” to her.

The old woman cannot believe that her own son chose to believe his wife instead of his own mother and kicked her out of the house.

She even recalls the time when she got sick and ate only plain rice porridge with soy sauce in her bedroom alone.

She also suffered from bruises and has parts of her body swollen as a result of the daughter-in-law’s violent action. Thankfully, her friend who was also the one who recorded the video has taken her to the clinic and hospital for a check-up.

When the video made it to social media, it has enraged the netizens as many people could not believe a son could banish his own mother from the house.

Many users also commented that it was very disrespectful of the son to treat his mother that way.

Watch the full video of the heartbroken mother here.