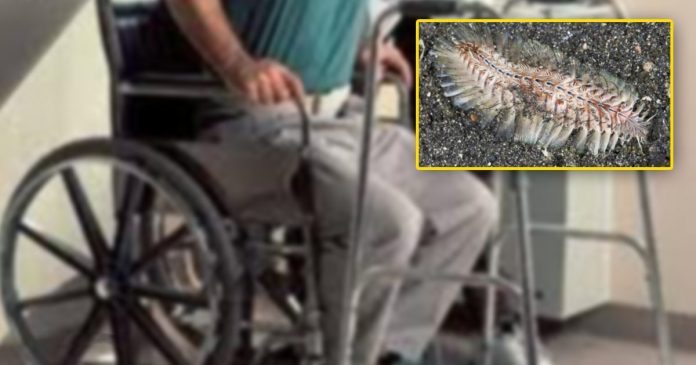 A Malaysian man claimed that his left leg was paralyzed after he was stung by a golden fireworm on an island in Perak, Malaysia.

36-year-old Mohd Fadzil Mohd Yunus was working as a tourist guide on Pangkor Island, in Perak, Malaysia when he was stung by the golden fireworm.

In an incident which happened in December 2017, Mohd Fadzil was waiting for a group of tourists at the beach when the golden fireworm stung his left foot.

However, it did not occur to him that what had just stung him was venomous.

“I immediately looked at the foot and saw a small, white-colored caterpillar,” he told the local newspaper, Harian Metro.

His left leg began to feel itchy and painful after the incident but he brushed it off as nothing. Unfortunately, his left foot swelled up to twice its original size two months later.

He initially thought that it was gout and went to the hospital to get treated.

“I was referred to Seri Manjung Hospital for further treatment and was admitted to a ward for a month. My case was also referred to Armed Forces Hospital (HAT) Lumut,” Mohd Fadzil told the newspaper.

However, his case worsened and he later requested for a follow-up treatment at another hospital, Tuanku Ampuan Najihah Hospital (HTAN) Kuala Pilah.

Unfortunately, even after several operations, his left leg was left paralyzed with little hope for recovery.

They are covered in sharp and venomous bristles filled with toxin which cause a burning sensation when comes into contact with skin.

When they feel threatened, golden fireworms will break their bristles, sting and release the toxin into the punctured skin. A sting by this worm can cause itchiness, inflammation and swelling.

Do seek immediate medical attention if you get stung by golden fireworms as they are proven to be dangerous.