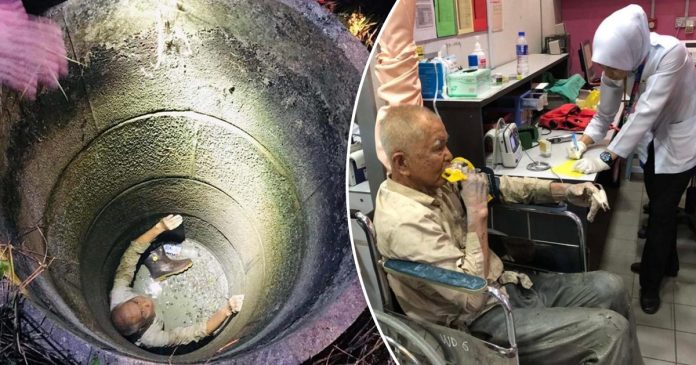 A 70-year-old Malaysian man was forced to eat frogs and drink muddy water for 37 hours after he fell into 13-foot water well at a palm oil plantation.

The old man accidentally fell into the deep well at a palm oil plantation where he works on May 23.

According to SinChew, the man went to the palm oil plantation on the morning of May 23 as usual to harvest ripe palm fruits.

However, he accidentally fell into the well when he was working at the plantation around 9 am.

The man, fortunately, survived the frightening fall but he later failed to climb out of the abandoned well as it was covered with slippery moss and grass.

The chest-deep water made it even more difficult for him to climb out of the water well.

When the man did not return home for lunch as usual, his wife became concerned and went to look for him at the plantation but her search ended in vain.

Eventually, the search and rescue team found him inside the well 37 hours later at 9.40 pm the following day on May 24.

They later managed to pull him out from the well safely.

When he was found by the search and rescue team, the old man was exhausted and hungry as he was trapped more than a day inside the well.

As soon as he was pulled out, the man was given a bottle of water and bread before he was rushed to nearby hospital for further treatment.

“When I could not find any more of the frogs, I started to panic. At that time, I thought that I could only last for one more day. If no one found me by Sunday, I would have died.”