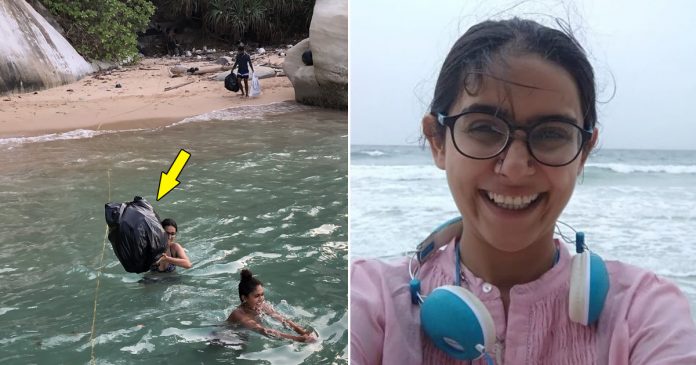 Garima Poonia was supposed to pursue her Master’s degree at the University of Sussex in the United Kingdom but that would mean seeing Neil Island continue being polluted with waste for at least a year.

“It was a tough call. I cannot explain it, but in my heart, I wanted to make a difference to the island,” Poonia told The Better India.

The 26-year-old girl then ended up going to one of India’s Andaman Islands, Neil Island, instead of flying to the United Kingdom. At Neil Island, she organized Kachrewaale Project to help the island manage its waste.

It first began in 2017 when Poonia visited the island for a scuba diving course.

She was expecting majestic views, deep blue waters and clean golden sand but all she could see was trash in every corner of the island.

“I saw a lot of trash like bottles, fishing nets, and broken plastic items on the beaches; these primarily came from the ocean. I saw how most resorts and households were burning garbage in the open,” she said.

“I kept thinking about the beautiful marine life I had seen during my scuba course, and how it is affected by all this trash. And the fact that in the absence of a Solid Waste Management system, these islands were getting dirtier.”

Home to almost 6,000 people, the island has been getting popular among tourists but it comes with a high cost; an increase in waste and pollution.

Plus, as it is an island, getting rid of the trash is not easy and since the island lacked the recycling facility, it got worse.

The waste was either burnt or dumped in a trench.

As Poonia has worked in the waste management sector, she knew that she had to do something for the island before it was too late. In order to save the island, she sacrificed a lot of things including not taking up the Master’s offer from the UK’s University of Sussex.

She then moved to the island which lacks phone connectivity and internet access alone. “It was like a journey into the unknown, I had no idea what would happen,” she recalled.

Luckily, she managed to get her finances sorted by getting a job at a local magazine while Benny Jacob, the manager of Emerald Gecko resort gave her accommodation and food.

For the next several months, she visited every resort on the island, Local Panchayat, and diving community to spread awareness before starting her first cleanup drive in December 2018.

Since she first started Kachrewaale Project, a total of 200 kilos (440 lbs.) of trash have been removed from the beaches. She even managed to convince the resorts to segregate their waste into paper, plastic, tetra paks and metal, resulting in a further 230 kg (507 lbs.) of dry waste sent to the recycling center in Port Blair which has never happened before.

Thanks to her effort, now the authorities have now planned a household collection system for the locals who have no means of disposing their waste.

It has not been easy with some other issues like shortage of volunteers but at least Poonia’s project saw a positive response from the locals.

Now, the locals and the resort owners are standing shoulder-to-shoulder with Poonia to keep Neil Island waste-free.

“They also want to solve this problem of trash,” Poonia said.

“We are looking at ways to reduce the generation of waste on other islands as well. We also plan to phase out plastic bottles by encouraging the use of RO-water.”

Man learns English for higher income so that he can pay...