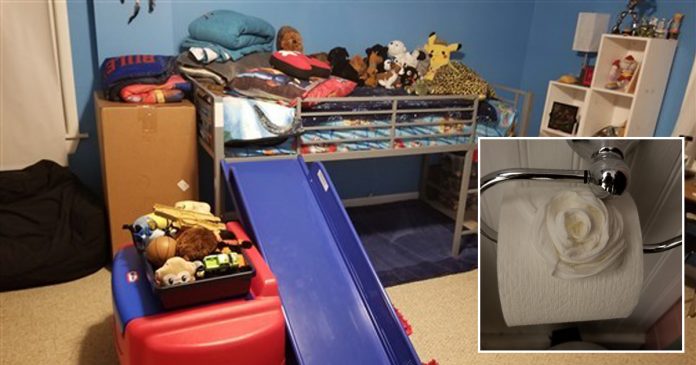 When Nate Roman returned to his home in Marlborough with his 5-year-old son, he realized that someone had broken into his home.

It quickly sent chills down his spine but after a quick search later on, Roman realized that nothing was lost. In fact, his home looked visibly cleaner and organized than before.

According to WCVB-TV, the 44-year-old man found out that an intruder had broken into his home after his young son noticed their back door was opened.

Obviously, it terrified Roman knowing that an intruder was in his home. “It was terrifying to know someone was in your house,” he said.

However, when he made a quick inspection, he noticed that the intruder had taken nothing and actually did a favor for him.

Apparently, the intruder made all beds, neatly stacked all of his son’s stuffed animals and even spent some time to do an origami rose on the toilet paper.

“They scrubbed everything down. They did the shower, did the toilets,” Roman said.

Nevertheless, since the intruder cleaned all rooms except for the kitchen, Roman thought that it was best to call the police.

“I was immediately worried that someone was in the house,” he said.

Upon initial investigation, The Marlborough Police Department said that they were taking the case seriously but currently had no leads or suspects.

Roman believed that it may not be an intruder but a cleaning service who mistakenly went to the wrong house due to the origami rose on the toilet paper.

However, he was not taking chances and he has changed all of the locks to his home.