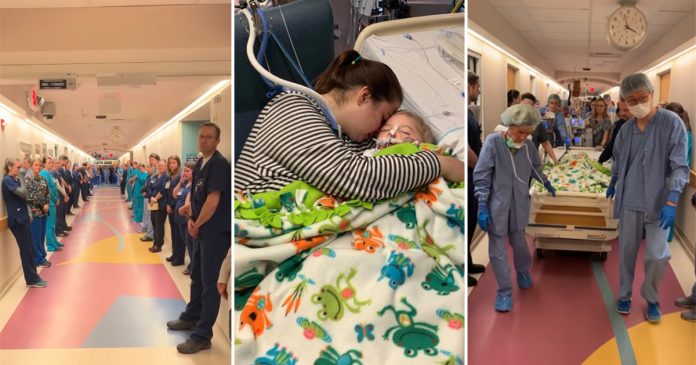 This is the heartbreaking footage of 22-month-old Coralynn Sobolik being wheeled into surgery to donate her organs after she was declared brain dead.

As the toddler was wheeled into the operating room, her mother, Meagan Sobolik, kissed her goodbye before she can be heard saying, “You get to save three people. I love you forever.”

Little Coralynn can be seen wearing a little knitted hat as multiple of wires attached to her tiny body.

Doctors and nurses at Mayo Clinic Hospital, Rochester also stood in line to pay last respect to the toddler while singing Amazing Grace.

Coralynn who was from New Hampton, Iowa, was admitted to the hospital after she was infected with parainfluenza – a group of viruses that causes respiratory infections, particularly in babies and children.

During the five-day battle with the virus, Coralynn suffered from three cardiac arrests.

The medical staff had to perform CPR on her for 25 minutes before she was declared brain dead.

However, Coralynn’s death would not be in vain.

Three people will be saved by Coralynn as she donated her kidneys, heart and liver after her life support was turned off on April 22.

“Whether it’s your mother, brother or little one, you have a choice to let their legacy live on,” Meagan said.

“Coralynn now has a legacy that can live on through these three different people.”

She also expressed her gratitude to the hospital staff who honored her little girl as she was wheeled into surgery to save three other lives.

“I don’t know if there is a word for more than phenomenal but the hospital staffs were just that. They treated us as though they were our family.”

“It was such a moving moment and I’m so touched that Coralynn managed to touch that many lives.”