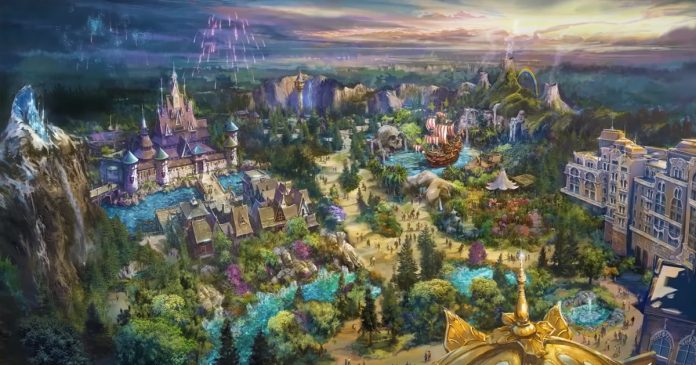 When it comes to Disney World, there’s no doubt that Japan is one of the best. But that didn’t stop them in making more amazing things.

Recently, it was announced by operator Oriental Land Co. that Tokyo DisneySea will have an expansion to their family with the eighth themed area set to open there in the fiscal year starting April 2022.

Named as Fantasy Springs, the themed area will add four new attractions to the park based on popular Disney movies. Two of them will feature ‘Peter Pan’ while the others will give highlights on ‘Frozen’ and ‘Tangled’.

A new themed area will be added to the family.

Not only that, but the extension also includes three restaurants and a new 475-room hotel that will look out over the theme park in Urayasu, east of Tokyo, Chiba Prefecture. It was said that approximately 250 billion yen ($2.3 billion) will be invested in the construction of the new theme park expansion.

This is how the entrance of Fantasy Spring illustrated to be.

The fountain inside the new themed area will be one of the many things you can’t miss out.

With that cost, Fantasy Springs is said to be the most costly expansion project in the Tokyo Disney Resort—also featuring Tokyo Disneyland. What more amazing is that the size of the planned expansion believed to be 140,000 square meters—making it the largest in Tokyo DisneySea since it opened in 2001.

This is how the Peter Pan area is illustrated to look like.

This is how the Frozen area will look like.

“We would like this to become the only one of its kind in the world,” said Toshio Kagami, the Oriental Land Chairman, and Chief Executive Officer.

You might see Rapunzel hanging her long hair from this tower soon!

Fantasy Spring will be one of the largest and most costly expansions in Tokyo DisneySea history.

Hopefully, we’ll get to see it very soon!

The way you show your hands will reveal more about your...