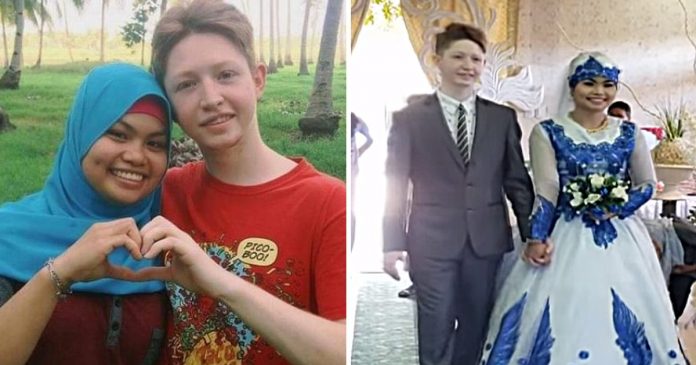 We’ve heard a lot about those who find love through social media, but not many meet the other half quite like this couple. The couple who’s now husband and wife draws the attention of many due to their unusual first meeting.

Samra is a 23-year-old lady from the Philippines who works as a domestic helper in Saudi Arabia. As she lives far from home, Samra likes to play online games especially RPG (Role-playing games) to reduce the pressure from her work and homesickness that she deals with every single day.

Little did she know, the guy she met from an online game ends up becoming her husband.

Samra met 21-year-old Triston Wallin from the United States while playing RPG. As they developed feelings for each other in 2017, Samra and Triston started to communicate through video calls every day.

They video called each other every day.

As a professional gamer, Triston often presented Samra with special game equipment and game coins while enjoying their ‘date’ online—in the game. Thanks to that, they got closer to each other and Triston did propose to Samra several times.

Unfortunately, Samra rejected his feelings each time thinking that she’s not yet ready for a serious relationship.

But last September, Samra finally decided to accept Triston’s proposal on his birthday. After that sweet birthday gift ever, the couple met each other for the first time in the Philippines in December. Triston flew from the US just to meet the woman he loves.

Triston later decided to join her religion and married Samra.

The couple held two different simple weddings and now currently lives in the Philippines. However, Triston plans to bring his wife back to the US later and help her apply for a permanent residence permit.

They are now happily married!

Forget Tinder, you can now use RPG games to find love too!

This famous Indian star once got married to a banana tree—she...