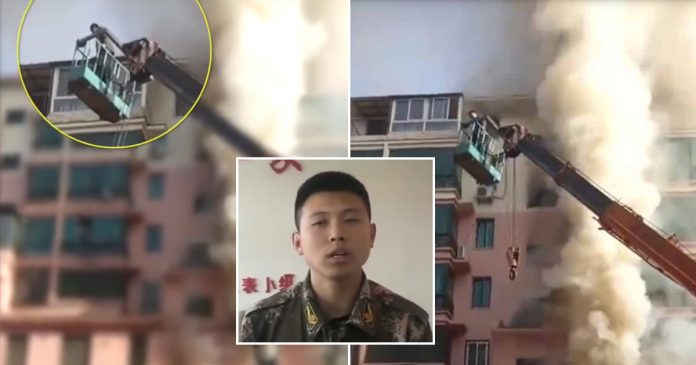 Lan Junze who works as a crane operator was working at a construction site when he saw a residential building was on fire. He then quickly drove his crane over to the building to rescue the trapped residents.

Thanks to his quick action, he managed to save 14 people in just over 30 minutes!

Lan who was working at a construction site in the Liaoning city of Fushun noticed that a seven-story apartment building was on fire.

By the time he noticed that the building caught fire, the residents on the upper floors were already trapped due to the heavy smoke.

The fire was reported to start from a grocery store on the first floor of the apartment building before it quickly spread to the upper floors within minutes.

Luckily, the 19-year-old crane operator immediately drove over his crane to the building and rescued the residents.

His heroic act was caught on camera as he used the crane to help evacuate the trapped residents from the upper floors of the building.

In spite of the heavy smoke and wires blocking the crane in the air, Lan managed to evacuate the residents.

“At that time, I only wanted to save people. I didn’ think of anything else. I didn’t have the time,” he said.

Following the incident, Lan quickly earned praises from the public as many people hailed him as the “Crane Man”.

“This young man is good. Praises to him!” one user wrote while another user commented, “Now, such a person can definitely be called a hero.”

He was even awarded the honorary title, “Best Family” by the local government and Fushun Women’s Federation on May 12.

In spite of his selfless act, Lan remained humble and said that he did was what his parents have taught him when he was younger.

“My parents have educated me since I was a child. When others face difficulty, I must lend a helping hand. This is what I should do. Now, everyone is safe!”