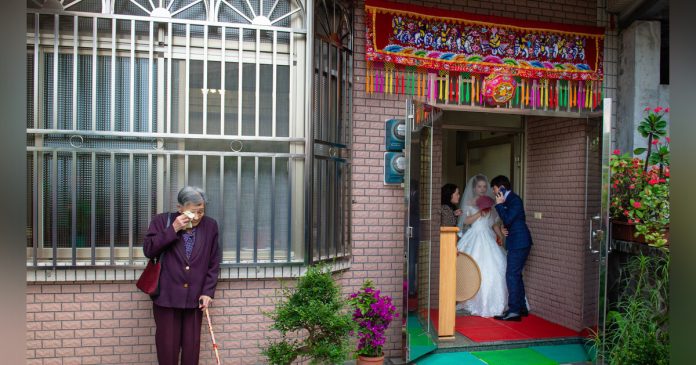 That was what the camera captured when the grandmother ran outside to wipe her tears when her granddaughter got married.

“90-year-old grandmother, on the day when her granddaughter gets married, she silently sheds her tears outside,” the caption wrote.

It was both tears of joy and sadness. As she did not want her granddaughter to see her crying on her wedding day, she quietly went outside of the house but the touching moment was captured.

As she was wiping her tears next to a window, the granddaughter was ready to step outside to begin her new life as a married woman.

The heart-rending image was taken by See’N Image Studio on the wedding day of the granddaughter. Just before the bride was about to walk out of the door, they suddenly caught her grandmother crying alone not too far from the entrance.

Standing outside the house in her purple suit, the 90-year-old grandmother silently wiped her tears off as she did not want to spoil her granddaughter’s big day.

When the photo was posted to Facebook on April 11, it quickly made rounds on social media as many users were touched by the pure love shown by the grandmother to her granddaughter.

Some users even shared a similar story to the photo. “My grandma hid in the room when I got married,” one user wrote while another user commented, “I am very touched, it reminds me of my late grandmother.”

It is such a beautiful moment to see how the grandmother was both happy and sad to see her granddaughter that she raised all these years to grow up and get married.

18-yo girl dances with teddy bear ‘father’ in a heartbreaking birthday...