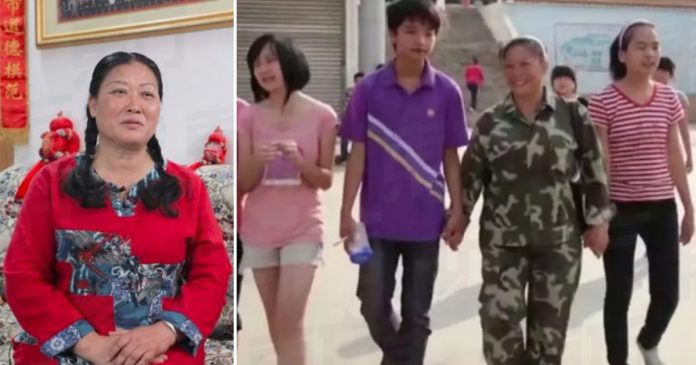 For over 40 years, Mai Qiongfang from Guangxi, China has been supporting 87 children from the underprivileged neighbourhood all on her own.

Thanks to her, 20 out of 87 orphans managed to go to the university with some of them currently studying at top universities such as Beijing University and Tsinghua University.

It began in 1979 when the then 19-year-old Mai who worked as a handyworker at People’s Hospital of Baise City’s laundrette found out about a boy who could not continue his secondary school because his grandmother fell ill.

The boy was supposed to go to a secondary school in Guilin but he barely had money to pay for his grandmother’s hospital bills, let alone to pay for the train ticket to go to Guilin.

Mai later decided to support the boy so that he could go to school.

A few years later in 1983, she came across a woman from Tianlin who was hospitalized at the hospital where she worked. Mai decided to lend help to the woman after she found out that the woman had no one to take care and visit her at the hospital.

She also went to visit the woman at her house after she was discharged from the hospital.

That was when she discovered that the people in the woman’s neighborhood were short of food and clothing.

Mai then went back to Guangxi to collect second-hand clothes and some dried food to be sent to the neighborhood.

Ever since the two incidents, she has been helping the needy and poor people including poor students, many of them were orphans who could not afford to go to school.

Mai has one biological son of her own. Until today, there are at least 87 children who have been supported by Mai.  She not only sponsored them but also walked them to school.

There are always extra beds, quilts, chairs and other necessities in Mai’s house. At one time, there were 14 children living under her roof and they finished 90 kg of rice in 7 days.

Thanks to her support, almost every child she sponsored have graduated from universities and working or continue studying abroad.

In spite of her very humble background, Mai Qiongfang continues to send help and food to those who are in need.

When asked what motivates her to help others in need, she said that she was the happiest when the people she helped told her that the clothes she gave kept them warm and the food kept them full.

Now, Mai’s only hope is for all the children she supported to succeed in their life.

“I can’t teach the children knowledge, I can only teach them to be human,” Mai said.