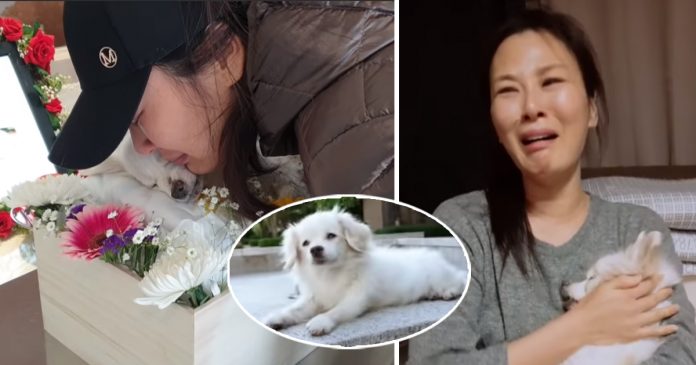 Losing a pet can be totally devastating for anyone including this family who had to say goodbye for the last time to their 16-year-old pet dog.

Okey, who had accompanied his family for the past 16 years passed away just recently last February. Even during the last moment of his life, he still warmed everyone’s heart with his lovely smile and sweet temperament.

In the video that his owner recorded before he took his last breath, Okey can be seen lying in the arms of the teenage boy as he is being surrounded by his family members.

Even when he no longer had the strength that he used to have, Okey still responded to the mother and nodded in approval when the mother sang him a sweet lullaby.

Just a moment after the mother said her gratitude to Okey for accompanying their family for almost two decades, Okey took his last breath.

It was absolutely heartbreaking for the young boy and his family to see Okey leaving them for good but they knew it was time.

16-year-old Okey had fallen sick for two years and he was even hospitalized during the period.

Unfortunately, nothing could be done to treat Okey.

His family later brought him back home so that the elderly dog could spend the last days of his life being surrounded by the ones he loved dearly.

Even though Okey was always sick, they did not expect him to leave them sooner than they thought.

As the teenage boy cradled his frail body in his arms, it began to appear quite obvious that Okey was going to leave them soon.

Lucky for Okey, he got to spend his last moment with his family.

When the video was posted to YouTube in March, it quickly attracted 1.72 million viewers who expressed their condolences and sympathy for the family for losing their beloved pet dog.

It was a sad goodbye for both Okey and his family but they knew it was not the end.

“Thank you for coming to us. We will meet each other again in the next life.”

This cat walks up to 7 miles every night to steal neighbor’s shoes, the owner needs to return the shoes by using technology

ABOUT US
GoodTimes provides you interesting daily feeds of touching stories and news.
Contact us: [email protected]gmail.com
FOLLOW US
© Copyright by GoodTimes
MORE STORIES