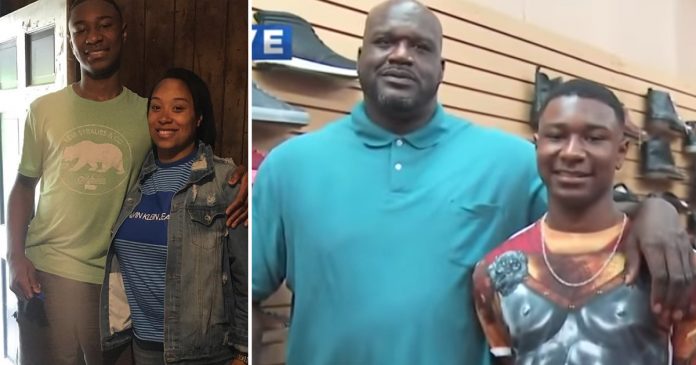 When young Shaquille O’Neal had a tough time to find a size 18 penny loafers to wear to the prom, an owner of a shoe shop gave him a pair of shoes for free.

Now, when O’Neal found out that a 13-year-old was in a similar situation as him recently, he quickly stepped up to help him.

When Bruce Teilhaber, the owner of Friedman’s Shoes in Atlanta found out about O’Neal’s quest, he later gave the future Hall of Famer a pair of size 18 penny loafers for free.

Since then, O’Neal has been a loyal customer to his shoe shop even when he grew to size 22.

What was even more important, Teilhaber’s kind action has taught O’Neal a life lesson that he never forgot.

So, when the retired NBA star knew that 13-year-old Zach Keith needed to find a pair of size 18 shoes, he did not hesitate to give him one.

Keith who also plays basketball wears a size 18. It has been tough for him to find a new pair of shoes in that size and they do not come at a cheap price tag.

His mother, Brittany, was struggling to afford shoes for her growing son.

Luckily for the teenage boy and his mother, O’Neal offered some help when WGCL reached out to him to ask for a favor.

Obviously, Keith was beyond surprised when he saw O’Neal and WGCL‘s Sharon Reed at Friedman’s Shoes with several pairs of brand new shoes!

“Like, whoa,” Keith told WGCL. “He wants to buy me shoes, out of all people?”
This will help a lot,” Brittany said. “I won’t so much have to worry about buying him dress shoes. He hasn’t had a pair of dress shoes in about four or five years because it’s been hard trying to find the ones that actually fit.””And for me, it was just, it was very touching, very heartfelt and to know that there’s somebody out there that has his back,” she added.

As for O’Neal, Keith’s situation reminded him of the time when Teilhaber helped him.

“Bruce did it for me, and I just want to return the favor,” O’Neal said.At the end of the day, Keith returned home with not two pairs of shoes but 10! Thanks to O’Neal, he never has to worry about getting a new pair of shoes when his shoes get worn out in the nearer future.