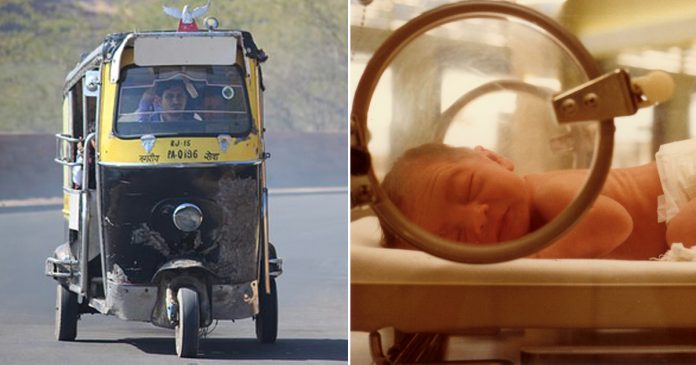 Babu Muddrappa was about to call it a day when he headed home after dropping his last passenger at the railway station on April 15. It was 2.30 pm and as he was passing by a street, he suddenly heard the distressed cries of a woman.

When the 29-year-old autorickshaw driver looked around, he saw a pregnant lady going into labor on Whitefield road. Unfortunately, no one had stepped up to help her.

Upon seeing the helpless woman about to give birth alone on the street, Babu then quickly jumped into action.

He later took her to the nearby Vydehi hospital where the doctors later told him to take her to CV Raman hospital.

“I felt sorry for the lady who was in labor, and at the same time, I was furious with people’s behavior towards her. I took her to Vydahi hospital where the doctors asked us to go to CV Raman hospital,” he told The Better India.

When they arrived at CV Raman hospital, he was told to find the woman’s relatives or family to fill in an admission form but seeing that the woman was in agony, there was no way he had the time to find her relatives.

Babu waited until the woman delivered her child.

At 9.30 pm, he was informed that the woman whose name was Nanditha had safely given birth to a baby girl.

However, as her baby was born prematurely, she suffered from serious breathing problems. When Babu knew about the baby’s health complications, he took the baby to Bowring & Lady Curzon Hospital so that the newborn could get the necessary medical attention.

Then, Babu returned home in the early morning to get a fresh change of clothes before he left to CV Raman hospital to check up on Nanditha. Nevertheless, he was later told that Nanditha had left the hospital.

“It was one of the most dreadful moments of my life when I learned that the mother had abandoned her newly-born child. I have my children and running away is the worst thing a parent can do, says the 29-year-old,” Babu said.

In spite of that, Babu continued visiting the newborn at the hospital and even paid for her hospital bills and medicine.

Unfortunately, on May 4, just 18 days after she was born, the baby girl passed away.

He wanted to perform a funeral for the baby but the hospital did not allow him to do so.

Following the death of the baby, Babu filed a formal complaint against Nanditha at a police station.

To him, it was unacceptable for her to abandon her infant when the baby was fighting for her life at the hospital.

In spite of the incident, he would still offer help to those who need it. “Helping a fellow human is not a task for me. It is a good deed, and I will continue to do so till I die.”