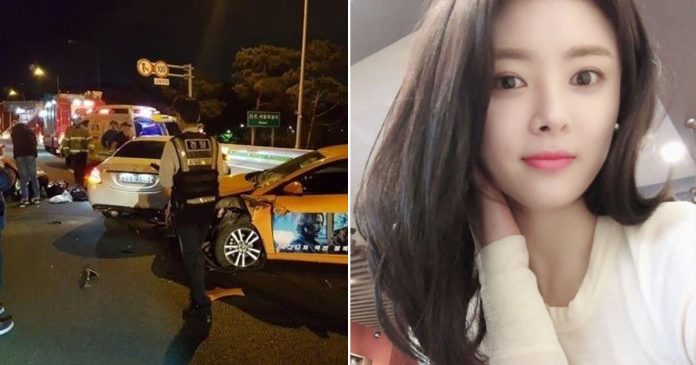 South Korean actress, Han Ji Seong has been confirmed by the police as the 28-year-old woman who passed away following a three-vehicle collision on Monday.

The crash which took place near Incheon International Airport in South Korea killed the actress at 3.52 am local time.

Reports said that the actress was driving with her husband before they stopped in the middle lane of a busy expressway for her husband to take a toilet break.

The actress then got out of the car and walked to the back of the vehicle, as told by the husband.

According to him, they stopped abruptly in the middle lane as he had to relieve himself urgently. “I had to relieve myself urgently and so we abruptly stopped the car. But I have no idea why she didn’t stop at the kerb instead. I only noticed the accident when I returned,” the husband said.

However, police later found a piece of new evidence that seems to contradict the husband’s statement.

At the beginning of the investigation, the police had difficulty investigating as the footage from the dashcam of Han’s car did not have audio.

Following the discovery of the new evidence, it was revealed that Han already got out of the car before her husband ran across the highway to relieve himself and the crash occurred just 10 seconds after the husband reached the guard rail.

According to another new report, it was most unlikely that the husband did not aware of the accident.

Netizens have speculated that the late actress may be intoxicated before the crash happened or was on drugs following her stopping the car in the middle lane.

Others also speculated that the couple had an argument before Han got out of the car to take some fresh air and to cool down.

An autopsy will be performed soon to find out the cause of her death.

Nobody would have guessed correctly the real age of this Singaporean...