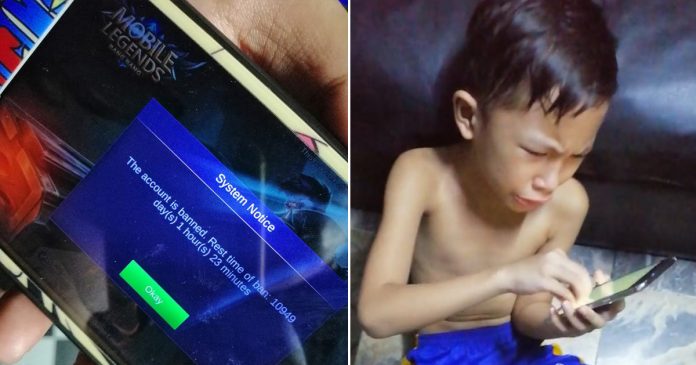 Can you imagine being banned from playing your favorite games for 30 years? For this Filipino boy, it is the reality and he just cannot accept it!

Recently, a Facebook post has been making rounds on social media after it shows a boy from the Philippines getting banned from playing Mobile Legends for 10949 days, 1 hour and 23 minutes!

Mobile Legends is a popular mobile game in many countries across Southeast Asia including the Philippines. It has become a phenomenon to the point that most people you see staring at their phones are probably playing the popular game.

Including this boy but apparently, he has to wait for another 10949 days to be able to play it again. That is the equivalent to 30 years!

The father of the boy, Mak Samonte certainly could not help but enjoy the whole ordeal that his son is going through.

In his post, Mak shows how frustrated the boy is when he realized that his account has been banned for three decades that he cries!

However, the father did not say the reason why his son got is banned in his post. Some users then shared their guesses in the comment section that the boy may have been caught using cheat codes while playing the game.

Other users even commented that they used a fake phone for the sake of a viral post.

Nevertheless, the phone screen looks pretty real and most importantly, the boy has to wait for 30 years.

If this is true, perhaps it is time for the boy to learn his lesson and take it as a sign to stop spending so much time playing the game!