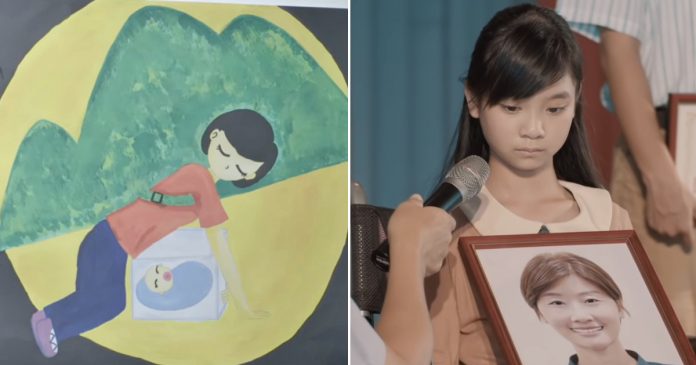 “She’s not my mother.” That was what 10-year-old Yang Yah Ting said when the presenter at an award ceremony asked her if she wanted to say a few words to thank her mother.

The young girl has just won first prize from Kaohsiung Children’s Art Award for her painting called “Mother”. It was a beautiful painting, with a mother bending over forward to protect her baby as the infant sleeps peacefully underneath her.

With all the inspiration that surely came from her mother, everyone certainly did not expect Yang Yah Ting to say such words.

“She’s not my mother,” she said to the audience.

It was love at first sight for Chang when she first held little Yang Yah Ting in her arms.

The sight of the cute baby girl would totally warm anyone’s heart. How did she end up here?

“Her parents are in jail for drugs, she’s been subject to domestic abuse,” the young woman explained to Chang. “She has brain damage. Her limbs are smashed.”

Upon hearing that, Chang’s heart sank. She was ready to give the baby all the care and love she needed but one thing remained a problem.

“Where else can she go?” Chang replied.

Ever since that day, Chang dedicated all of her time to take care of Yang Yah Ting.

She brought the baby to the doctor for further treatment and even gave the infant regular massages to stimulate her paralyzed limbs.

Thanks to her effort and hard work, Yang Yah Ting grew up as a cute little girl.

Her hands which were once paralyzed now could hold a pencil and draw!

Unfortunately, not everyone understood Chang’s dedication to turning Yang Yah Ting’s life for the better.

Her husband felt uneasy when she brought Yang Yah Ting to their home when the girl fell sick but to her, she would do anything for the little girl.

Including protecting the little girl from falling debris and roof when the nursery collapsed to a massive earthquake later on.

Yang Yah Ting survived the earthquake but not Chang.

She died while bending over her body to protect Yang Yah Ting during the earthquake and for that, Yang Yah Ting was forever grateful.

“She’s not my mother. She is greater than my mother.”